Mildred Cohn was an American biochemist who is best known for her role as a pioneer in applying new technologies to measure organic reactions.

Mildred Cohn was an American biochemist who is best known for her role as a pioneer in applying new technologies to measure organic reactions. She was born into a family of Jewish immigrants but managed to overcome the prejudice of the time. An outstanding and driven student, she graduated from high school when she was only fourteen years old.³ As an incredibly talented young woman and a persistent student, she pursued her goals and built a career in biochemistry, despite the fact that, at the time, women working in laboratories were regarded as distractions. Additionally, throughout her career, she faced many obstacles as well as discrimination due to her Jewish origin. Nonetheless, she was able to achieve more than many men and gained remarkable recognition in science.

Cohn’s most notable research work includes the development of magnetic resonance imaging (MRI). She used magnetic forces to examine the atomic nucleus in order to study the shapes of molecules and identify compounds.⁴ Her research activities focused on the utilisation of isotopes and she became an authority in this field. She had the best mentors she could have at the time, most of them Nobel Prize winners. As a person, Cohn was family-oriented and followed the principles of social justice. She married the theoretical physicist Henry Primakoff, an immigrant from Russia, and they had three children. Her husband was very supportive of her career and considered his wife an intellectual companion. Cohn, on her part, called him ‘cerebral and very European in the regard of housework’³ (p. 82). Her students confirmed that she was a warm person, as well as a demanding teacher and mentor.

During her studies, she was strong, focused on her goals and did not listen to anybody telling her that she would not be able to become a scientist because she was a woman, and a Jewish woman at that. Cohn developed an important medical technology which today is known as magnetic resonance imaging or MRI and, together with other scientists, created techniques and instruments that helped to study protein behaviour in the body. 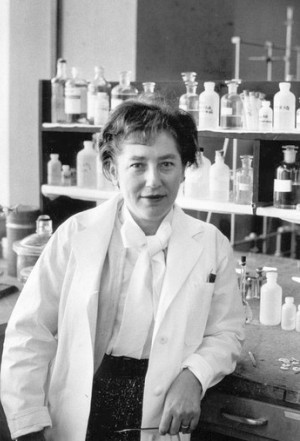 Mildred Cohn was born in New York City on 12 July 1913 to Isidore and Bertha (Klein) Cohn, Jewish-Russian immigrant parents. The fact that her father was a rabbi and Jewish teacher had a huge impact on Mildred’s life.  A Jewish woman interested in chemistry and science was rather unimaginable at the time. Very keen and motivated, Cohn had an excellent chemistry teacher in high school, which seems to have played an important role in her decision to study chemistry. She found physics even more enticing when studying at Hunter College, but the school did not yet provide it as a primary subject, so Cohn graduated in chemistry with a minor physics² (p. 81). She then attended graduate school at Columbia University, but had to leave after a year because she could not afford the tuition fee and teaching assistantships were available only for male students.² (p. 81) Between 1934 and 1937, Cohn was a student of Harold Urey, Nobel Prize winner in Chemistry in 1934 Urey tried to discourage her, saying that he did not mentor his students much and expected them to teach themselves. She did not as accept this argument, though, and persisted until he finally admitted her to his research group³. To earn the money for her university tuition she lived at home and did babysitting jobs. When she finished her master’s degree, she found a job at the National Advisory Committee of Aeronautics at Langley Field in Virginia¹ (p. 92). She was the only woman among seventy men involved in a project to design an aircraft diesel engine. This enabled her to gain valuable experience in applied research and, most importantly, to save enough money to return to Columbia University, where she insisted in being mentored by Professor Isidor Rabi, who won the Nobel Prize in Physics (1944) for devising a method for observing atomic spectra. Under his mentorship, Cohn started to study isotope separation. At first she failed to separate ¹²C and ¹³C due to equipment problems, but continued working on the exchange of isotopic water (H² ¹⁸O) with organic compounds such as acetone¹ (p. 92). She was the smallest person in the laboratory and when Urey wanted to determine the volume of water in the body she was asked to be the experimental subject, but this idea was not very thrilling for Cohn.¹

Surprisingly, Cohn had been a researcher for twenty years before she went after a professorship. During her research and teaching times she worked with another Nobel laureate (1955), biochemist Vincent du Vigneaud. She moved from Columbia to du Vigneaud’s laboratory in Washington and, in the late 1930s, followed Vigneaud to Cornell University in Ithaca, New York.³ In his laboratory, she utilized isotopic tracers to follow sulphur amino acid metabolism and also studied transmethylation. Working with Vigneaud’s team was very different from the type of research style she had experienced at Columbia, since “individual researchers would do only a limited part of a project, with du Vigneaud coordinating all the parts”¹ (p. 93). Cohn spent nine years working for/with him and made many experiments which resulted in building and electrophoretic apparatus used to separate proteins. Another important innovation was a mass spectrometer which she produced to separate and measure compounds on the basis of their mass. In her work with du Vigneaud, this was used to follow the metabolism of components labelled with stable isotopes¹ (p. 94).

While working and living in Washington, Cohn met Henry Primakoff, also a scientist, and he became her supportive husband and soul mate. Surprisingly, Cohn could not be employed by the same university because of anti nepotism rules. For twenty-one years she did not have a faculty position, which, on the one hand, had obvious financial consequences, but, on the other, meant that she could focus on her research projects and put her soul and heart into them. Her first two children were born during World War II and staying in the research field was good because it was easier to stay home when the children were ill. Nonetheless, the family had a home helper to take care of the housework and children, so that Cohn was able to stick to her work in the laboratory, though she had to withstand tremendous social pressure as a working mother. All her children obtained doctorates and the oldest daughter, Nina, was interested in psychology, and wrote an essay about the effects that having a working mother had on children² (p. 83). In the interview with Hargittai, Mildred Cohn revealed that:

“I got a lot of criticism from relatives. /…/ After I had my first child, my mother-in-law carried on a campaign to get me to quit working, but she didn’t succeed. One of the reasons my oldest daughter reacted as she did was that when she was in second grade, she was 7 years old, she joined the Brownies and when the woman who ran it found out that I worked she told my child that I was a bad mother.” ² (p.83)

In 1946, Cohn joined the Cori laboratory in St. Louis to work with Carl and Gerty Cori. She was one of the first researchers who used nuclear magnetic resonance and electron paramagnetic resonance to study enzymatic reactions¹ (p. 95). They encouraged her to work independently and she was determined to make experiments on her own to determine the structure of ATP (adenosine triphosphate). Some years later, she decided to work on oxidative phosphorylation and joined Paul Boyer at Harvard. At this point she decided to deal with the more controllable problem, which was the mechanism of kinases, enzymes that use ATP to phosphorylate protein substrates¹ (p. 96). Later, in 1955, she spent one year working in the elucidation of the structure of metal-ATP-enzyme complexes in Hans Krebs’ laboratory at Oxford. A few years later Cohn’s husband was appointed Donner Professor of Physics at the University of Pennsylvania and she entered the Johnson Foundation under the direction of Britton Chance, who was an outstanding person “with a love of the sea that manifested itself in a love of sailing and the invention of an automatic steering device for ships.”¹ (p. 97) Chance encouraged Cohn to explore the structural changes in ATP and ADP. When working in the Johnson Laboratory, she had the chance to carry out experiments that revealed the nature of the complexes between nucleotides and metal ions, which she better described in her famous article published in the Journal of Biological Chemistry. Many of her papers and articles were and still are classics in the field of chemistry and biology. In 1965, Cohn became a full professor at the University of Pennsylvania School of Medicine and she was awarded a Career Investigatorship of the American Heart Association¹ (p. 98).

It was a very big shock for her when her husband died in 1983, because they were very close. The same year when Cohn was awarded the National Medal of Science (1982), she retired but remained active at the university until just a few months before she passed away in 2009. The National Women’s Hall of Fame inaugurated her the day after her death and her legacy lives on with her students, while all her achievements and innovations have had a tremendous effect on positioning women in science, more specifically in chemistry and biology.

Throughout her career, Mildred Cohn was surrounded by great scientists, many of them Nobel Prize winners, and she was certainly influenced by their intellectual work and enthusiasm.

She was the first woman elected to the editorial board of The Journal of Biological Chemistry and the first to become president of the American Society for Biochemistry and Molecular Biology.

The first thing I would suggest is, marry the right man. That’s the most important thing. You have to have a husband who is fully supportive. That he does more than paying lip service to equality. My husband was really a feminist. He liked women and respected them. My second advice is whatever decision they make they shouldn’t feel guilty.

The piece of advice for women scientists. They should stress the scientist more than the woman. /…/ I read about a famous physicist who was considering going to Israel, but he hesitated. His wife persuaded him to seek Einstein’s advice. So he went to Einstein and Einstein sad to him, ”I’m a scientist first and a Jew second.” The same thing is for women. They should be scientists first if that’s what they are interested in, and a woman scientist second.

Mildred was a tiny woman, she was very small, but when she walked into the room it was very clear that she filled the place up and everybody treated her with the utmost respect. /…/ She was really renowned in the field; I was thrilled to find her because of number of reasons; she turned out to be a fabulous mentor, she was an incredibly warm person but she was also very demanding, scientifically demanding.

Here is an example of a woman who had tremendous ability but who was in secondary positions in academia practically until the time when she was elected to the National Academy of Sciences. Mildred continued to make important contributions to enzymology and oxygen-18 measurements that influenced my research over the years.

1963: The American Chemical Society’s Garvan-Olin Medal
1968: She was elected a Fellow of the American Academy of Arts and Sciences
1975: The Franklin Institute’s Elliott Cresson Medal
1979: The International Organization of Women Biochemists Award
1983: She was presented with the The National Medal of Science
1986: Columbia University’s Chandler Medal
2009: She was inducted into the National Women’s Hall of Fame in New York