Mae C. Jemison is an American engineer, physician, writer, professor, and NASA astronaut who is known as the first African-American woman to travel in space. Throughout her life she had to deal with gender and racial issues, but her belief in herself, her hard work and commitment eventually paid off and enabled her to achieve all her goals.

Mae C. Jemison is an American engineer, physician, writer, professor, and NASA astronaut who is known as the first African-American woman to travel in space. Throughout her life she had to deal with gender and racial issues, but her belief in herself, her hard work and commitment eventually paid off and enabled her to achieve all her goals.

Nowadays she tries to encourage and inspire others to pursue careers in science and medicine or to climb up the career ladder and hold respected positions in their field. She received global recognition not only for achieving her goals, but also for her contribution to the African and African-American societies. Nevertheless, she does not want to be seen only as a role model for black girls, as she has often stated, but rather as a role model for anyone, such as, for example,  an older white male who could start his science career because of a “little black girl” like her6. Mae C. Jemison is also a highly sought-after speaker on issues of health care, social responsibility, technology and motivation and therefore one of the most important women in the USA. 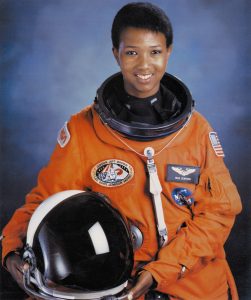 Mae C. Jemison was born on 17 October 1956 in Decatur, Alabama. Her father, Charlie Jemison, was a supervisor of maintenance for the United Charities of Chicago as well as a contractor and a roofer1 (p. 160). Her mother, Dorothy Jemison, was a schoolteacher in Chicago at the Beethoven school1 (p. 160). Mae’s parents encouraged their children from a young age, telling them that if they believed in their dreams and worked hard for to achieve them, anything would be possible2. Her older sister, Ada Jemison Bullock, became a child psychiatrist, and her older brother, Charles Jemison, a real estate broker in Chicago1 (p. 164). For Mae, her parents’ exhortation became her mantra, as she was setting herself the goal of becoming an astronaut and a scientist: “In kindergarten my teacher asked me – actually asked the whole class – now what do you want to be when you grow up? And I said, ‘I want to be a scientist’. And she looked at me and she said, ‘Don’t you mean a nurse?’ Now clearly, there is no issue with being a nurse. But the issue back then was, is that’s the only thing she could see a little girl growing up to do that had something to do with sciences. So she was trying to help guide me and counsel me […]. But I really just put my hands on my hips, and I said, ‘No, I mean a scientist’”5. As a child, Mae already felt that she had the ability to make a difference in the world and she undoubtedly worked very hard to achieve her goal3.

She graduated from Morgan Park High school at only 16 and received a scholarship to attend Stanford University as a science major, after rejecting MIT1 (p. 160). Unfortunately, as an outsider at university, she had to deal with gender and race issues for the first time in her life: “I felt totally invisible. At times, they would look through me. My questions would be handled in a condescending way, and even be ignored, or not answered. It was a new experience for me because I had been used to teachers and professors showing active interest in my quest for knowledge. Additionally, they did show active interest, at least they seemed to, in other students”1 (p. 160). However, Mae decided to keep on going and follow her dreams1 (p. 160). During her time at Stanford she also got involved in extracurricular activities and began researching and learning a great deal about space travel1 (p. 160). It was her friend, Sam Drenard, a Stanford graduate, who introduced her to the NASA space program and told her to apply for the mission on the space shuttle Challenger1 (p. 160). Despite her interest, Mae delayed her application until she felt more than qualified for the position1 (p. 160). Before that was the case, Mae firstly graduated from Stanford University in 1977 with a Bachelor of Science in Chemical Engineering and a second degree in Political Science and African-American Studies. In 1981, she completed her medical studies at Cornell University with a specialisation in biomedical engineering research. During her studies, she also earned a grant to travel to Kenya in order to work with the African Medical Research and Education Foundation which is known as the Flying Doctors, and worked as a volunteer in Cuba and in a Cambodian refugee camp in Thailand5. Later on she pursued an internship at the Los Angeles County-University of Southern California Medical Center1 (p. 161). After being a general practitioner with the INA/Ross Loss Medical Group in Los Angeles in 1982, at 26 Mae returned to Africa, to Sierra Leone, where she became the youngest Area Peace Corps Medical Officer in history1 (p. 161). After two years in Africa, she returned to the USA, where she started working with CIGNA Health Plans of California and also began taking engineering classes5. At this time, Mae felt that she was finally prepared for the NASA expedition and proceeded to apply1 (p. 161). In 1987, she received her acceptance by NASA as one of fifteen astronaut candidates and started her training for the shuttle Endeavor mission1 (p. 161). Mae was assigned as a mission specialist on the STS-47, Spacelab-J, a cooperative venture between the United States and Japan to perform experiments in life sciences and materials processing1 (p. 161). She claims that it was never her goal to be the first black female astronaut but rather to be in space in general1 (p. 161).

On 11 September 1992, Dr. Mae C. Jemison became the first African-American woman to travel into space and thus a great role model for many women and men around the world. After six successful years at NASA, Mae left in 1993 and founded the Jemison Group, Inc., which aims to “research, develop, and implement advanced technologies suited to the social, political, cultural, and economic context of the individual, especially for the developing world”5. Her work in West Africa made her witness the lack of knowledge that people had about space travel and she thought it was too simple to just think that the poor population cannot take advantage of space exploration: “The reality is the majority of us will not get off this planet […] So the long run is, some kind of space exploration has to benefit us here on earth”4. She also founded the Dorothy Jemison Foundation for Excellence, named after her mother, as well as the international science camp The Earth We Share (TEWS), which is an experiential residential programme for youth designed to build critical thinking and problem solving skills as well as science literacy. She also worked as an Environmental Studies professor at Dartmouth College from 1995 to 2002 and is currently an A.D. White Professor-at-Large at Cornell University. Since 2011, she has been working on The 100 Year Starship project, whose goal is to send humans into space within the next 100 years.

Mae C. Jemison is not only the first African-American woman who travelled in space but also someone who has had a great impact on our society. She is constantly fighting to make the world a better place and is therefore a great role model for everybody regardless of their gender, age, financial status or origin.

The thing that I have done throughout my life is to do the best job that I can and to be me.

When I’m asked about the relevance to black people of what I do, I take that as an affront. It presupposes that black people have never been involved in exploring the heavens, but this is not so. Ancient African empires – Mahi, Songhai, Egypt – had scientists, astronomers. The fact is that space and its resources belong to all of us, not to any one group … If we’re not there from the beginning, helping to determine what happens to these resources, we’ll have no say in how they are used.

I wanted everyone to know that space belongs to all of us. There is science in dance and art in science. It belongs to everyone.

Never be limited by other people’s limited imaginations…If you adopt their attitudes, then the possibility won’t exist because you’ll have already shut it out … You can hear other people’s wisdom, but you’ve got to re-evaluate the world for yourself.

1988: Essence Science and Technology Award
1989: Gamma Sigma Gamma Woman of the Year
1991: Honorary doctorate of science at Lincoln College PA.
1991: One of McCall’s 10 Outstanding Women for the 90’s
1992: Ebony Black Achievement Award
1992: Mae C. Jemison Academy, an alternative public school named after her
1992: Johnson Publications Black Achievement Trailblazers Award
1992: Mae C. Jemison Science and Space Museum at Wright Junior College in Chicago
1993: Montgomery Fellowship from Dartmouth College
1993: One of the women on Ebony’s Most Influential Women list
1993: Turner Trumpet Award
1993: Kilby Science Award
1993: Part of the National Women’s Hall of Fame
1993: chosen by People’s magazine as one of the “50 Most Beautiful People in the World”
1998: Selected by the White House Project as one of 20 women with the possibility of becoming U.S. President

In 1993, Mae Jemison was the first real astronaut to appear on the series Star Trek. She played the role of Lieutenant junior grade Palmer in the episode “Second Chances”, which was the 150th episode of the series. It was thanks to LeVar Burton, who played Geordi La Forge on Star Trek, who heard that she was a huge Star Trek fan and asked her if she would like to be on the show7.