Margherita Hack, Italian astrophysicist, was nominated full professor of Astronomy at the University of Trieste in 1964, and, simultaneously, became director of the Astronomical Observatory of Trieste. She was the first woman in Italy to hold such positions in the field.

In August 1955 Margherita Hack attended the assembly of the International Astronomical Union for the first time in her life. There she met Otto Struve, who invited her to work with him at the Astronomical Department of the University of California in Berkeley. During her stay in California, she did research on the bright star Epsilon Aurigae. Hack developed the hypothesis that Epsilon Aurigae is a “Be-star-like hot object at the centre of a large disk of occulting material”1 (p. 549). At the time this hypothesis was impossible to confirm, since “the space era had not yet begun”2 (p. 179, my translation). The hypothesis was confirmed in 1978, when the International Ultraviolet Explorer satellite was launched2 (p. 343).

Back at the astronomical observatory in Merate, Italy, she started to work on a spectroscopic analysis of the Cepheid variable star FF Aquilae. When she completed her  work, she showed it to Zagar, the director of the observatory, who was  was supposed to read the manuscript and send it to Memorie della Società Astronomica Italiana, the main Italian astronomy periodical. As Hack remembers in her autobiography, he never had the time to read it2 (p. 134). After more than a month, he decided to publish her work in Atti della Società Scientifica Lombarda, a periodical of the Lombard Scientific Society. In her autobiography, Hack writes that “[s]ending [her] work to the Atti della Società Scientifica Lombarda meant to bury it, because only the members of the society will read it, and maybe not even them”2 (p. 135, my translation).

In 1958, she went back to Berkeley where she started working on a book about stellar spectroscopy with Struve. In addition to this research, she published three statistical papers on anomalous stars that are chemically different from normal stars. These papers were a “fundamental point with which we were able to contextualize the characteristics of this class of anomalous stars and to understand them better”2 (p. 201, my translation). After Struve’s death in 1963, Hack finished the book Stellar Spectroscopy on her own and published it in two volumes in 1969 and 1970. The book quickly became a “classical reference textbook for the studies of stellar atmospheres”3 (p. 38).

In autumn 1940, Margherita Hack enrolled at university. She chose literature at the Faculty of Arts in Florence, but she thought her first class was “an hour of pointless chat in which I was not interested”2 (p. 43, my translation). This experience made her switch to the Faculty of Physics. 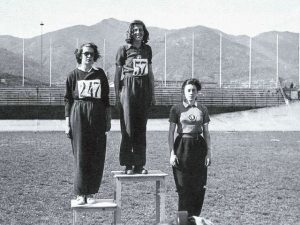 In May 1941 she won the high and the long jump competition in the Littoriali, a national student competition organized during the Fascist regime. To participate in the competition, she had to take a loyalty oath to the regime. Throughout her life she called this oath her “first serious compromise”2 (p. 47, my translation).

In her third year at university, she attended her first astronomy class. In 1944, she married Aldo de Rosa, a childhood friend. In the same year she asked professor Fracastoro to be her supervisor and he gave her the idea to write a thesis about Cepheid variables, a class of variable stars. She graduated in January 1945 with top grades.

In 1964, she was nominated full professor of Astronomy at the University of Trieste and, simultaneously, she became director of the Astronomical Observatory of Trieste. She was the first woman in Italy to hold such positions in the field4. At that time the observatory was “the last one in Italy”2 (p. 266) but within a few years she led it to national and international success.

In 1980, following the restructuring of Italian universities, she founded the Department of Astronomy at the University of Trieste. Given the fact that she was the only full professor of the subject at that University, she was appointed head of department.

Hack’s scientific career is marked by collaborations with major astronomers. The most important collaboration was undoubtedly the one with Otto Struve at Berkeley, as mentioned above. She collaborated with many universities and institutes, among them the Institute for Advanced Study in Princeton during the time when Robert Oppenheimer was its director, the Institut d’Astrophysique in Paris and the astronomical observatory in Utrecht. She was also a visiting scholar at Ankara University.

Back in 1953, she received a research grant and spent six months at the Institut d’Astrophysique in Paris. There she worked with Daniel Chalonge, a physicist who was doing research on the two-dimensional classification. During her stay in Paris, she used the collected data to do a research project about the absorption spectrum of some stars. Her study was published in the periodical Annales d’Astrophysique4.

Most of her research projects and papers were co-authored with other scientists. One of her most important papers was co-authored with George Mccluskey, John Hutchings, Yoji Kondo and Mirek Plavec-  The team studied the multiple emission lines in interacting binaries in ultraviolet spectra. The results were published in two articles in the Astrophysical Journal in 1975 and 19762 (p. 316).

During the 1970s, Margherita Hack had a prominent role in the Italian astronomical community. When the IUE (International Ultraviolet Explorer) was launched, she was on the front line to “make the Italian colleagues aware”2 (p. 334, my translation). As she jokingly recalls in her autobiography, “this promotional activity was a success. The proposals for programmes and the number of accepted programmes for the IUE by Italian researchers was so high that, playing with the acronym IUE, some European colleagues renamed it the Italian Ultraviolet Explorer”2 (p. 334, my translation).

During her scientific and academic career she was part of many working groups and committees in the ESA, NASA and in the International Astronomical Union, such as ESA-ESO Working Groups, NASA Working Group and the ESF Committee.

Astronomy taught us that we are not the centre of the universe, as it was believed for a long time and as someone wants us to believe even today. We are just a minuscule planet around a very common star. We ourselves, intelligent beings, are the result of stellar evolution, we are made of the stars’ material. (my translation)

I even call it [The Higgs Boson] god because it is the particle which explains how the material of other particles developed and since those are the particles from which everything derived, this particle is really god. (my translation)

1980: Premio Linceo for the fields of Astronomy, Geodesy and Geophysics
First woman to win this award.
1987: Presidency of the Council of Ministers’ Culture Award
1994: Targa Giuseppe Piazzi for scientific research
1995: European Cortina Ulisse Prize for scientific popular publishing for the book Alla scoperta del sistema solare
1998: A steroid 8558 Hack was named after her.
1998: Gold Medal of the Italian Order of Merit for Science and Culture
2011: Benemerenza Civica from the City of Trieste
Benemerenza Civica (The Civic Merit Award) is granted by an Italian municipality to a citizen, organization, or association  that have enhanced the prestige of the city.
2012: Knight Grand Cross of the Order of Merit of the Italian Republic

Hack never participated in any important artistic project, but she spent a lot of her time, especially after her retirement in 1997, teaching and explaining science, astronomy and astrophysics to the general public, first and foremost to children. In 2011, she co-hosted a programme in the TV channel DeAKids entitled Big Bang – In viaggio nello spazio con Margherita Hack5 [Travelling through space with Margherita Hack]. From 1996 to 2013, she wrote a column called Pan di stelle in the italian newspaper L’Unità. In the column, she talked about a variety of subjects, from science to civil rights, politics, gender equality, civil and LGBT rights. The archive of the newspaper is no longer online, but there is a book with the same title where her posts and articles are published6.

The only really artistic project she took part in was in 2006, when she wrote the lyrics for a song for the Italian singer Stefano Pais entitled Questo è il mondo [This is the world], with which he entered the first selection phase for the 2007 Sanremo Festival7. The song was not selected.

L’arte è donna (2017), MAG Gallery, Milan, exhibition. It’s an exhibition of the seven winners of the art contest La signora delle stelle 2016. The submitted art pieces had to be inspired by the figure of Margherita Hack.

During her scientific career, she published many original papers in international scientific journals, of which over 400 are included in the NASA archive. The list can be found at the following link: http://www.adsabs.harvard.edu. She also authored more than 20 monographies.

The following list is a selection of her publications: