Mary Somerville was a Scottish astronomer, mathematician, prolific science writer and translator. She, alongside Caroline Herschel, was the first woman to join the Royal Astronomical Society.

The first major work of Mary Somerville, and arguably the paper that paved the way for her scientific acknowledgement1 (p. 202), was ”On the Magnetizing Power of the More Refrangible Solar Rays”. Taking advantage of a period of exceptionally good weather in Chelsea, London, Somerville attempted to prove that magnetism was related to light by exposing a number of needles, partly covered by paper in order to encourage polarity, to solar rays2. While her conclusion that there is a causal relationship between magnetism and exposure to violet, green and blue rays of the solar spectrum2 was retrospectively dismissed3 (p. 236), Somerville’s paper is credited until today for its major contribution to stimulating further investigation4 (p. 184) around what was then considered a very contentious topic5 (p. 328).

As a result of this wider recognition, Somerville received her most important professional proposal one year later. Her acceptance of Lord Henry Broughman’s offer to translate Laplace’s Mecanique Celeste solidified Somerville’s reputation as one of the greatest science writers of her era6 (pp. 57-58) and her work Mechanism of the heavens was praised for being ”much more than a translation”4 (p. 185). Sir John Herschel characterised it as a book for posterity7 (p. 167), while the Literary Gazette exalted its simplicity and scientific accuracy by labelling it as the ”readiest means […] possible” to comprehend the complex work of Laplace6 (p. 83). Indeed, the achievement of Somerville’s undertaking is perfectly reflected in her own words: ”I simply translated Laplace’s work from algebra into common language”8 (p. 253). The preliminary dissertation which accompanied her translation contained the essential mathematics to introduce the reader to Laplace’s text4 (p. 185), while her analysis through the use of diagrams9 made this knotty work more accessible to a wider audience10 (p. 164).

Her second book, On the connexion of the Physical Sciences, was immensely successful6 (p. 135) and attempts to integrate various branches of science with the aim of highlighting their interdependence4 (p. 186). This symposium of sciences is split into different sections and covers physical astronomy, matter, sound, light and its phenomena, heat, electricity and magnetism and descriptive astronomy11. Somerville’s work was so influential that it prompted Elizabeth Patterson to label it as the book which determined the notions of what constitutes Physical Sciences for over three generations6 (p. 129). The book is also credited as being the major inspiration in initiating the investigation which led to the discovery of Neptune12.

In her Physical Geography book she further developed her thoughts on the concept of heat budget and altered some of her initial ideas presented in her Physical Sciences13. She backtracked on her position that the same quantity of heat received by the earth is remitted to space11 (p. 299) and, instead, concluded that one-third of the heat the earth is exposed to is absorbed by the air before it reaches the earth13 (p. 270). She also made a strong case on the influence of the sea on climate modification by claiming that seven tenths of the atmosphere lie in the oceans13 (p. 289). Physical geography, despite its descriptive nature4 (p. 186) and mostly secondary-based analysis12 (p. 65), exceeded the demands of simply summarizing the work of Somerville’s contemporaries14 (p. 415). According to Sanderson, it managed not only to examine the causes of the phenomena described, but also to explain the connections between them14 (p. 415).

At the age of 89, she published her last book, On Molecular and Microscopic Sciences, in which she attempted to cope with the rapid advancements in microscope technology and the discoveries that ensued4 (p. 189). The book was published in two volumes and examines the new discoveries in vegetables and marine animal life and structure15.

Somerville also made significant contributions to the study of comets12 (p. 67) through the publication of an essay on Halley’s Comet in the Quarterly Review, in which she explored, among other things, the possible outcome of a comet striking the earth16. A lesser known, yet equally remarkable achievement by Somerville was her major influence on the Russian government’s decision to carry out simultaneous observations of the tides on the empire’s coastline14 (pp. 418-419). 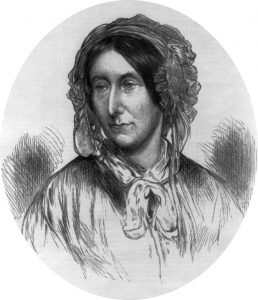 Mary Fairfax Somerville was born in Jedburgh, Scotland in 1780. Despite the legal background of her mother’s family and her father’s admiral position in the British navy, Mary did not receive any formal education. She was only offered lessons in fields that were deemed to be appropriate for females14 (p. 411), such as piano and needlework. It was her uncle and later father-in-law, Thomas Somerville, who introduced her to the achievements of female scholars7 (p. 37) and cultivated her passion for learning7 (p. 37). Her brother’s help in providing her with advanced reading material was pivotal in her intellectual development12 (p. 17), since access to advanced reading material for women was very restricted17 (p. 6). She acquired a copy of Euclid’s Elements of Geometry and later attempted to learn Greek so she could read Herodotus and Xenophon7 (p. 48). However, the idea of a woman deeply interested in sciences was so alien to society that Mary recalled her father saying to her mother, ”Peg, we must put a stop to this or we shall have Mary in a strait jacket one of these days”7 (p. 54).

At the age of 24, she got married to Samuel Greig, a Captain in the Russian navy who died three years later. As a widow, she further pursued her interest in mathematics by reading Ferguson’s Astronomy and Newton’s Principia. She gained access to academic circles as a result of her marriage to her second husband, Dr. William Somerville, who was a fellow of the Royal Academy and a very supporting figure in Somerville’s intellectual pursuit18 (p. XI). She soon found herself interacting with the most acclaimed scientists of her era such as John Herschel7 (p. 148), Roderick Murchison7 (p. 58), John Playfair7 (p. 81) and, most importantly, William Wallace; the person that encouraged her to study Laplace’s Mécanique Céleste12 (p. 19) and paved the way for her acclaimed translation19 of the book (p. 404).

While her career was largely left intact by society’s prejudice against female scientists4 (p. 185), mainly due to both Somerville’s exceptional qualities and alleged femininity4 (p. 182), she never managed to overcome her own preoccupations against women20 (p. 318). Alic describes Somerville as ”something of a paradox”4 (p. 182) due to her pro-feminist ideas which essentially contradicted her derogatory views on women’s intellectual abilities14 (p. 420).

In 1835, one year after the highly successful publication of The Connection of the Physical Sciences21 (p. 38), she and Caroline Herschel became the first women to be elected to the Royal Astronomical Society.

Due to her husband’s deteriorating health condition21 (p. 40), the couple moved to Italy in 1836, where they spent the rest of their lives. In Italy, she authored a series of unpublished articles, published two more books and gained membership of six Italian scientific societies. She outlived her husband and four of her six children and died in her sleep in Naples in 1872. As a tribute to her passing, the London Morning Post hailed her as the ”Queen of Nineteenth Century Science”4 (p. 182).

Despite the significant influence of important figures of the scientific world on Mary Somerville, her work was solely authored by her. Her Mechanism of the Heavens became a source of pride for the British public6 (p. 83) and was celebrated by Somerville’s contemporaries as one of the most important achievements in science6 (p. 83). Galloway’s adulatory review called it ”the most remarkable works that female intellect ever produced, in any age or country”22 (p. 1). Likewise, On the Connexion of Physical Sciences was both financially successful and critically acclaimed6 (pp. 135-146). Its simple, yet accurate, approach to complicated scientific issues was particularly praised in the Quarterly Review23. Physical geography was also positively received by the scientific world and was hailed for its lucid style14 (pp. 414-415). The last book by Mary Somerville, On Molecular and Microscopic Sciences, was also her least successful, commercially and critically, and its revised edition was never published4 (p. 188).

I must say the idea of making money had never entered my head in any of my pursuits, but I was intensely ambitious to excel in something for I felt in my own breast that women were capable of taking a higher place in creation than that assigned to them in my early days, which were very low.

[…] for when I was a girl I took the anti-slavery cause so warmly to heart that I would not take sugar in my tea, or indeed taste anything with sugar in it.

Age has not abated my zeal from the emancipation of my sex from the unreasonable prejudice too prevalent in the Great Britain against a literary and scientific education for women.

My liberal opinions, both in religion and politics, have remained unchanged (or rather have advanced) throughout my life, but I have never been a republican. I have always considered a highly educated aristocracy essential not only for government, but also for the refinement of a people.

Since Somerville has achieved so much, will any girl be prevented from seeking  knowledge of the physical sciences if she wishes it?

Mrs. Somerville, alone perhaps of women, knows as much of mathematics as is now needful for making any considerable mathematical discovery.

Who throughout her very long life, has been eminently distinguished by her proficiency in those branches of science which form the basis of Physical Geography.

While Somerville’s work was overwhelmingly scientific, her book Physical geography provided an insight into her ideological and political views. She fiercely criticised slavery13 (p. 492) and expressed her concerns on class struggle and egalitarianism13 (p. 505), concluding that inequality is inevitable13 (p. 505). She also advocated women’s right to education3 (p. 237) and accused British laws of being adverse to women7 (p.344). Somerville praised John Stuart Mill’s book The Subjection of Women and wholeheartedly supported his petition in the House of Commons to grant women voting rights7 (p. 344). Her feminist activism never abated despite the failure of Mill’s attempt, and she would joined the General Committee of Women suffrage in London and demanded that university degrees be granted to women too7 (p. 346). Mary Somerville also adamantly rejected the 19th-century idea of ”the great man theory” and instead believed in the collective nature of scientific breakthroughs4 (p. 188).

A preliminary dissertation on the mechanism of the heavens (1832), Philadelphia, Pennsylvania, Carey&Lea.

On the Connexion of the Physical Sciences (1834), London, J.Murray.