The Arab world has an impressive literary culture. Known as the poetry kings, the Arabs have one of the most splendid and vast poetic traditions in the world. But the tradition came also with rigid patterns and rules for a poem to reach perfection. For a poem to be regarded as such, and maybe as a good one, its structure had to follow specific guidelines. For generations and centuries, the Qasidah was the only respectful way to compose poems. The rhythm, meanings and symbols of these compositions were well established: “The qaṣīdah has always been respected as the highest form of the poetic art and as the special forte of the pre-Islamic poets”.¹ The Qasidah is a literary genre and a form of meter structure: “Qaṣīdah, also spelled kasida, Turkish kasîde, Persian qaṣīdeh, [is a] poetic form developed in pre-Islamic Arabia and perpetuated throughout Islamic literary history into the present. It is a laudatory, elegiac, or satiric poem that is found in Arabic, Persian, and many related Asian literatures”.¹ The classical Qasidah is a “non-strophic, tripartite poem employing 50 to 120 hemstitch lines, monorhyme and quantitative meter with a tripartite sequence of thematic modules”.² All this changed, however, with Nazik Al-Malaika. 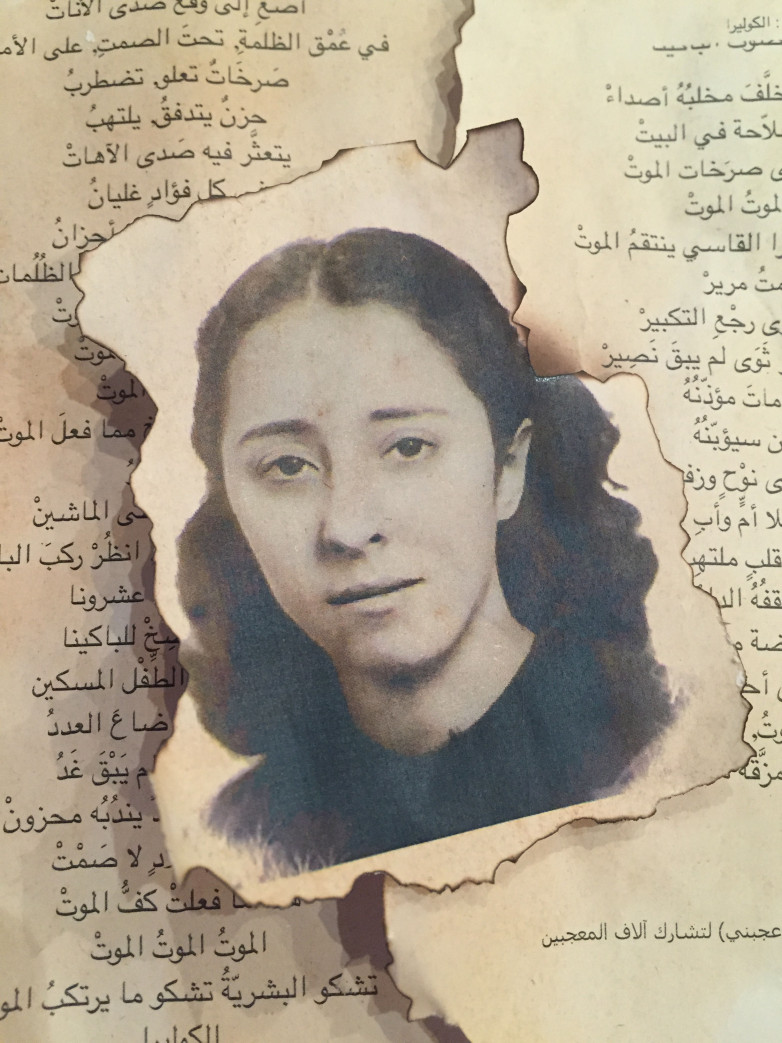 Always traditional and conservative, in the 20th century the Arab world went through a period of radical change. Innovation, modernism, and rebellion are the keys to understanding the processes that went on in every Arab country. In literature and the arts, the movement spread from Egypt in the early decades of the century (1910-20-30s) to Syria and Iraq in the next decade (1940s) and then to the rest of the Arab countries, such as Lebanon, Morocco, and Palestine.

This movement or mughayara (which means: dissimilation, dissimilarity, breaking with the others) represented a conscious effort “of breaking with the tradition by creation”.³ However, for it to happen, new forms (like the novel), new rhymes (like free-verse), new meanings (inclusion of surrealism or the dream world) needed to be discovered and conquered.

Modern Arabic poetry began in the 1940s in Iraq. Two poets claimed that the qasidah structure was to be left behind for it could not account for the day-to-day life of the people. Its rigid meter and rhyme could no longer express the inner world, the new rhythm of modern life, the symbols arriving from the West.

The two poets that first asserted that free-verse was to be adopted were Nazik Al-Malaika and the Egyptian poet Louis Awad in his diwan Plutoland. They did so by publishing poems that broke away from the traditional scheme, but for a poem to be considered the beginning of a movement, as stated by Nazik Al-Malaika in her introduction to The issues of contemporary poetry, “four conditions were necessary: 1) intention, 2) a confident announcement of the invitation, 3) a wide reaction and 4) provocation for other poets to write in the same style”.⁷

Nazik Al-Malaika’s diwan’s publication in 1947 (which included her poem called “The Cholera”) initiated this great movement of free verse in the Arab world. But why would Nazik choose to break with the meter and rhyme of the well-established and appreciated qasidah at such a young age? Mostly because of her musical knowledge. As she explained in Issues, she wrote “The Cholera” to express what she felt for the Egyptian people, who were suffering from an outbreak of this epidemic in that same year. She tried to capture in words the sounds of the horse’s hooves carrying carts full of dead bodies⁷ (p. 35). She explained: “Meter is the soul that electrifies literary material transforming it into poetry. Images and feelings do not become poetic, in the true sense, until they are touched by the fingers of music and the pulse of meter beats in their veins”⁴ (p. 28).  And it worked.

This renaissance movement in the Arab world also gave rise to a women’s liberation movement, for it was impossible to innovate and break free in the arts without trying to break free from the patriarchal order in society. This can be observed in women´s publications and magazines, the beginning of women’s education first in schools and later in universities, the founding of women’s associations, the presence of women in the public sphere⁷ (p. 11-15).

Nazik Al-Malaika’s work and achievements were steps of outstanding importance in the women’s liberation struggle. 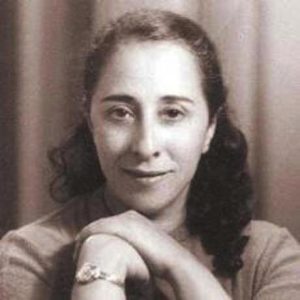 Born in Baghdad into a wealthy bourgeois family, Nazik was able to receive a higher education with a greater opening to Western ideas. Both her parents were poets. Her mother, Omm Nizar, was a famous poet who had to publish with a male pseudonym; and her father worked as an Arabic teacher and wrote a twenty-tome encyclopaedia. Therefore, Nazik discovered her love for literature at an early age, taking a great interest in Arabic language and poetry. She wrote her first poem in classical Arabic at the age of ten.

When she graduated from the Baghdad College of Arts in 1944, she could speak four languages, and she was publishing poems in newspapers and magazines as well as playing the oud.

Her first poem collection (al-diwan) was published in 1947 with the title Ashiqat al-layl  [Night’s lover] and featured her most famous poem, “The Cholera”. This poem explored the free-verse form, which was unfamiliar in the Arab world at that time. Indeed, in an autobiography she wrote about those years, she recalls that even her parents were critical of the poem and “predicted its failure, yet she stood by it, stating simply, ‘Say whatever you wish to say. I am confident that my poem will change the map of Arab poetry’”⁶ (p. 58).

In the 1950s she lived in the USA for two one-year periods. In 1951-52, she studied Literary Criticism at Princeton University thanks to a Rockefeller scholarship. This was exceptional at the time, since Princeton only started accepting women students in 1969, almost two decades later. In 1954-55, she studied at Wisconsin University, where she obtained a Master’s degree in Comparative Literature.

Back in Iraq, she taught at the University of Baghdad and helped to establish the University of Basra together with her husband, Abdel-Hadi Mahbouba, whom she married in 1961. In those years, Nazik kept on writing poetry as well as papers on literary criticism and literary theory, and was regarded as one of the greatest modernist writers. But even though she was an academic, hers was a struggle to give voice to the people, the oppressed. Her poems speak about Arab women’s identity, revolution, the fight against colonialism, unity, social and economic equality, the people without a name.

The events of the late 1960s and early 1970s (the rise of the Baath party) made Nazik flee Iraq to never come back. She lived in Kuwait until its invasion by Saddam’s forces (1990), and then moved to Cairo until her death in 2007. These experiences changed Nazik’s poetry, which was now full of melancholy, isolation, and frustration. As Fatima Ali Al-Khamisi states, “She recognized she could not coexist with her harsh society. Consequently, she created her own private society where she could peacefully live though sadly”⁵ (p. 75).

1996: Al-Babtain Prize for Poetic creativity
2000: The Nazik Al-Malaika Prize for Arabic feminine creativity, story writing and novel criticism was created in 2000 to honour Nazik Al-Malaika´s achievements. It is an annual award given to women innovators by the Iraqi Ministry of Culture. 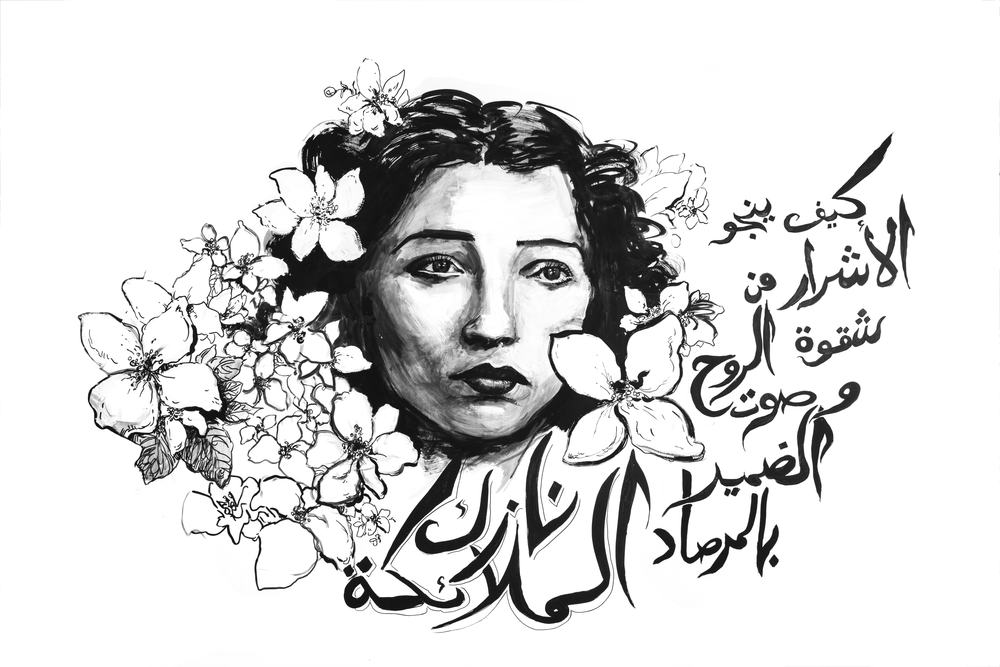