Dorothy Crowfoot Hodgkin was an exceptional scientist, ingenious in every aspect. She spent years working in a modest, scarcely funded lab in the basement of the Oxford University Museum; however, this did not stop her from becoming one of the leaders in the field of crystallography.

Dorothy Crowfoot Hodgkin was an exceptional scientist, ingenious in every aspect. She spent years working in a modest, scarcely funded lab in the basement of the Oxford University Museum; however, this did not stop her from becoming one of the leaders in the field of crystallography. With her outstanding skills and a career that lasted for six decades, Dorothy Crowfoot Hodgkin influenced the scientific world by making not one but a series of brilliant breakthroughs. Her revolutionary calculations made her a “magnet for unresolved crystal structures”1 (p. 33), and the reason for it is her reinvention of the process of cracking crystal codes. The beauty and importance of her contribution lie in the deep understanding of her area of interest, which helped her bring the method to a precision that did not exist before in crystallography. Her capabilities extended “far beyond what others considered possible at the time”2 (p. 225). The “transformation of crystallography from a black art into an indispensable scientific tool”2 (p. 225) allowed her to describe the atomic structure of penicillin (1945), vitamin B12 (1956), and insulin (1969)2 (p. 225). Her studies on insulin later led to a greater understanding of its action in controlling blood glucose. Her “determinations by X-ray techniques of the structures of important biochemical substances”3 won her the Nobel Prize in Chemistry in 1964 as well as a timeless reputation as one of the most prominent women in the history of science3. She was also the second woman to receive the Order of Merit (UK) and she is the only woman to have received the Copley Medal given by the Royal Society.

Born in Cairo, Egypt, then a British colony, on 12 May, 1910, Dorothy Crowfoot grew up as a very independent child. Her independence was triggered by the early separation from her parents, who were in Cairo during the war, while she grew up in England with her sisters and nursemaid. By the age of ten, Dorothy Crowfoot Hodgkin was already showing a strong interest in chemistry and crystals, repeating at home all the experiments she had been learning in the small private class she attended. That soon led to her first improvised home lab2 (p. 226). Six years later, her passion found focus after she received an important birthday gift: a book by William Henry Bragg, a Nobel prize in physics, about using X-rays to analyse the structure of crystals. With her newly discovered vocation, Hodgkin decided to enrol at the University of Oxford to study chemistry. At the time, the university decided to change some of its regulations to limit the number of women students, so that Oxford could keep on being an institution for men; nonetheless, Hodgkin was accepted and she graduated with first-class honours2 (p. 230-31).

After graduation, she started assisting John Desmond Bernal in an X-ray crystallography laboratory at the University of Cambridge, where she studied biological crystals. The collaboration with Bernal was highly beneficial for her career: in his lab she made thousands of photographs and mathematical calculations, and very soon the word about her exceptional abilities spread and her workspace became a mountain full of crystals waiting for her to be examined. At the time, before electronic computers were in use, the structure determination of complex crystals required years of calculations and the people who were aware of the brilliant advancements Hodgkin was making were highly excited to meet her. With Professor Bernal, she determined the structure of the protein pepsin in 1934, and, in 1937, she earned her PhD4 (p. 2465-66). In the same year she married Thomas L. Hodgkin, a historian with whom she had three children.

Both in Cambridge and in Oxford, where she returned to work as a Tutor Fellow of Somerville College responsible for teaching chemistry to women, she was strongly committed to her work and to projects that other scientists thought to be impossible. It was precisely this ability to see beyond things like this that helped her continue with her research in spite of the rheumatoid arthritis she was diagnosed with at the age of 242 (p. 235). In 1946, Dorothy Hodgkin and her colleagues managed to determine the structure of penicillin, and, a few years later, that of vitamin B12, whose final structure she calculated with one of the first computers; these findings were published in 1956. In 1969, thirty-four years after her first X-ray photography of the crystal insulin, Hodgkin discovered its structure.

In 1977, Dorothy Hodgkin retired. However, she continued to work for several peace organizations until 1994, when she suffered from a stroke and died at home at the age of 84. 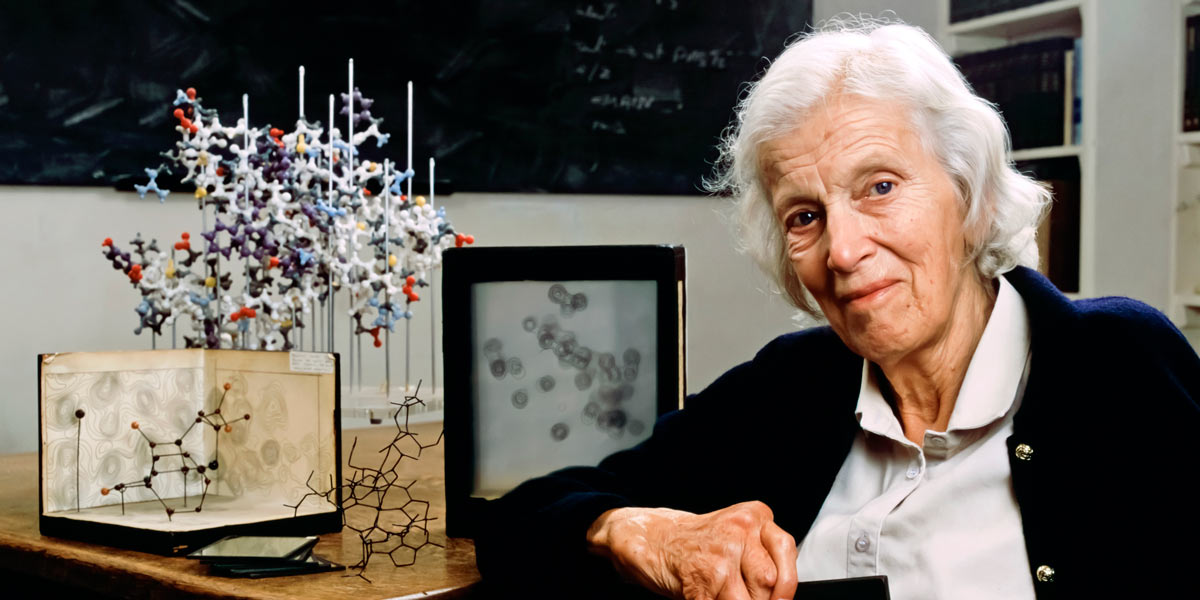 Dorothy Crowfoot Hodgkin did not share her Nobel Prize with anyone. Even though she had a team of assistants and some scientific partners during her career, the advancements towards the new technique for determining elements’ structures were made and perfected by herself alone.

Despite her success, discrimination and limited resources did not bypass her; Hodgkin’s working conditions were not always suitable and for years she worked only as an assistant. After graduation she had trouble finding employment, and if it were not for her uncle A. F. Joseph, she would never have had the opportunity to work with John Desmond Bernal at the University of Cambridge2 (p. 233). Even when she got the job at Oxford, her scientific success did not help her overcome the usual gender discrimination that Hodgkin and many other women in science had to experience; she had to wait eleven years to become a full University professor, twelve for an upgraded laboratory. Additionally, the endowed professorship she got in 1960 did not come from the University of Oxford but from the Royal Society1 (p. 34). Hodgkin’s experience made her well aware of the inequalities women scientists faced at the time, so she made a great effort to change that. Despite the fact that she did not want to be seen as a feminist role model, Dorothy Crowfoot Hodgkin taught her students about the importance of women’s education, and she petitioned on the behalf of every woman who experienced any kind of discrimination4 (p. 2468).

[T]here are two moments that are important. There’s the moment when you know you can find out the answer and that’s the period you are sleepless before you know what it is. When you’ve got it and know what it is, then you can rest easy.

cited by Cox-Fill, Olivia (1996), For our daughters: how outstanding women worldwide have balanced home and career, Greenwood Publishing Group, p. 176.

Dorothy Crowfoot Hodgkin was Chancellor of the University of Bristol from 1970 until 1988.

A Dorothy Hodgkin Fellowship was founded by the Royal Society to support and help progress distinguished scientists and engineers at an early stage in their career5. Every March, an annual memorial lecture – the Dorothy Hodgkin Memorial Lecture – is held in honour of her work.

Her health problems notwithstanding, Hodgkin was an activist in the nuclear and peace movements throughout her exceptional scientific career and family life, as well as a supporter of socialism2 (p. 252). She gave international cooperation and connections great importance, and she was the long-time president of the Pugwash Conferences on Science and World Affairs (1976-1988). She was denied a visa to the United States in 1953, because she belonged to a group called Science for Peace, which included some communists, and it was only years later that she was allowed into the country4 (p. 2468).

X–ray crystallography and the chemistry of the sterols (1936), Cambridge, University of Cambridge.