Alice Guy-Blaché was a pioneer in the development of the newly founded art of movie making, as well as the accompanying movie business.

Alice Guy-Blaché was a pioneer in the development of the newly founded art of movie making, as well as the accompanying movie business. Aged twenty three, when she was working for Léon Gaumont at a company dedicated to the supply of photographic devices, she asked to borrow the Biographe (a 60-mm motion-picture camera)³ (p.81) for personal use. The Biographe was a camera that the Company had developed soon after the appearance of the Lumiérè cinematograph. With the Biographe she started filming what would become the first ever movie with a scripted narrative: Le Feu aux choux (1896).

Being self-taught in this area, Alice was an independent and innovative filmmaker, and given that the movie had become a huge success, Léon decided to make her the head of a new production company he had created. From that moment on, she directed, produced, and wrote the scripts for almost seven hundred films, while at the same time, she was establishing the foundations of what would become the seventh art.

“She defined the role of movie director as separate from that of camera operator. She eschewed expensive backdrops in favor of real locations […] She pioneered the use of close-ups to dramatic effect […] several years before D. W. Griffith, who is usually given credit for that innovation, even started working in film. […] She was the earliest to deploy character arc and the psychological perspective of a lead character in a film story, a technique her competitor at Pathé, Ferdinand Zecca, failed to master when he plagiarized films such as La Marâtre (The Stepmother, 1906) and Sur la Barricade (1907)”³ (p. 81).

Alice did all of these things in the space of just a decade. She also pioneered the use of special effects, colouring films by hand and using camera effects such as reverse motion, the substitution trick, overprints, and double exposure. Using the cronomatograph, a synchronised-sound system developed by Léon Gaumont, she produced and directed about one hundred short films, which prefigured dubbing and video clip production techniques still employed in the present day.

In 1907, she travelled to the USA and founded her own film production company, becoming “one of the first women (along with Lois Weber) to manage and own her own studio: The Solax Company”¹ and continued to further contribute to the growth of the language of modern cinema, embracing all types of genres such as comedy, history, science-fiction, metafiction, drama, and westerns.

She also filmed movies with feminist approaches like Les résultats du féminisme (1906), The call of the Rose, Madam’s Fancies (1907) and In the year 2000. In this vein, “in 1913 she wrote a text highlighting the exclusion of women from the movie world.”⁴

She was also the first person to make a film involving an all African-American cast: A fool and his money. 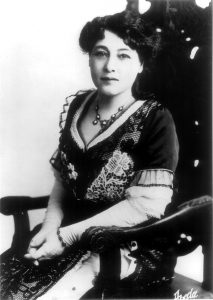 Alice Ida Antoinette Guy was born in Paris, daughter of Emile and Marie Guy who were living in Chile where they ran a book publishing company. Alice stayed with her grandparents in Switzerland until she was four years old, when she travelled to Chile to live with her parents. In 1879, aged six, she travelled to France to start her education at a convent school near the Swiss border. Some years later, Alice´s father, Emile, and her older brother died and she had to look after her widowed mother. At that point she started studying to be a shorthand typist and stenographer.¹

In 1894, she was hired as a secretary at Comptoir Général de Photographie, a camera manufacturer, in Paris. The next year the company was sold to Léon Gaumont with whom Alice continued working. On 22nd March of that year, Léon and Alice were invited to see a demonstration of the cinématographe the Lumière brothers had just invented. The Lumières had a scientific view with regards to their invention, but Alice had other entirely different things in mind.¹

Léon started developing a competing design: the Biographe, and Alice asked him if she could use it to shoot short films with some of her friends as actors and Gaumont agreed as long as it didn’t interfere with her secretary job.²

She was 23 when she wrote, produced, costumed, and directed the one minute piece “La Fée aux choux”, which translates to “The Cabbage Fairy”. It was the first fiction-film (as in a film with a scripted narrative) made (it came out a few months before Georges Méliès’ short-films appeared¹). The short film was such a success that Léon Gaumont employed Alice as head of production of the new film production department of the company.

“After that first film, she directed and produced or supervised almost six hundred silent films ranging from one minute to thirty minutes in length […] In addition; she also directed and produced or supervised one hundred and fifty synchronised sound films for the Gaumont Chronophone.”² This went on throughout the best part of a decade (1896-1906), during which important technical advances were made and special effects techniques were developed and experimented with. It was the birth of the film industry.

In 1906, Alice Guy directed the world´s first blockbuster: The Birth, the Life and the Death of Christ, a thirty five minute production (amazing for the time), and her most ambitious film made at the Gaumont Film company. “The film impresses not only with its scale and artful design, but also its technical sophistication.”¹ It was also a great success and was copied by many other film production companies. But with success, also came envy from others, and many thought she was doing what was supposed to be a man’s job, and there were even attempts to discredit her. In the same year, she travelled to Germany to sell Gaumont´s Cronophone and met Herbert Blaché who was working as a camera operator at the same company. They fell in love in Berlin and got married the next year in 1907. The couple moved to the USA and Herbert started working as a production manager for Léon Gaumont in the United States and Alice was able to get the time to start a family in New York City. In 1908 their first daughter was born and Alice resumed making movies. She founded her own film production company, Solax, in 1910, whilst pregnant with her second child. Within four years of being established, the company had become so successful it had to move to larger premises. “Whilst running Solax, Guy-Blaché made around fifty films […] and oversaw the production of 300 others.”¹

From 1908 to 1920 not only did she make formidable films but she also continued to work on the development of special effects and technical devices creating films each more sophisticated than the last.

“Solax success made the Blachés rich and famous. In 1912, Alice Guy became the only woman in the United States to earn in excess of $25,000 in one year. Her films were loved by the public and praised to the skies by the critics. The Blachés were on top of the world and then it all started to go wrong.”¹ As Taylor states, her fatal mistake was giving the presidency of her company to her husband, who soon started his own company, which absorbed Solax, putting his name in every film and erasing Alice´s. This and the birth of Hollywood (connected to World War I) made the Blanchés bankrupt within a few years.¹ Then, in 1918, Herbert ran off with an actress and Guy was left alone working on what would be her last film, Tarnished Reputations (1920). Two years later, the divorce was finalised and Alice moved back to France to look for a job, but no one would employ her, not even Gaumont. While in France, she realised that she had been systematically erased from the film industry; her films had been attributed either to male assistants, Gaumont, or her ex-husband. She had been wiped out and forgotten, and her name would not appear in the history of cinema in any form. At that point, Alice started writing her memoirs and looking for her lost productions, yet she found so little, and no one would publish her memoirs (until 1976). In 1968, Alice Guy died (again living in USA by that point), having been erased from history, and with her discoveries, achievements, and creations having been completely neglected.

My youth, my lack of experience, my sex all conspired against me.

The most famous woman you’ve never heard of.

A French film pioneer who invented the director’s job.

I was very impressed in the way she looked at society and questioned it; she really felt there was a place for women in films and directing.

cited by Pamela Green: Be Natural, the untold story of Alice Guy-Blaché

1953: Légion d´Honneur. (France)
1958: Honoured in the Cinematique Française ceremony.
2004: Historic marker dedicated to Alice Guy on the location of her Solax Studio.
2011: Accepted as a member of Director´s Guild of America.
2012: Director’s Guild of America Lifetime Achievement Award.
2013: Inducted into the New Jersey Hall of Fame. 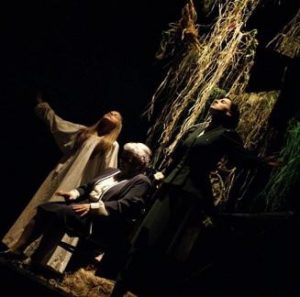 —Circle X Theatre (2002) Laura Comstock’s Bag-punching Dog, USA, (musical about the invention of cinema, in which Alice Guy was a lead character).

WORKS BY THE AUTHOR

Lepage, Marquise (1995) The Lost Garden: The life and cinema of Alice Guy Blaché, National Film Board of Canada. (Documentary) https://www.youtube.com/watch?v=zli0mysaUeU