Best known as the “First Lady of Arab Hip-Hop”, Shadia Mansour has been rapping since she turned eighteen. Being part of the Palestinian Diaspora that resulted from the exile of thousands of Palestinians throughout the years, she was born and grew up in London, but never forgot her cultural heritage.
Shadia Mansour was deep into politics and pro-Palestinian protests since a tender age and kept on researching the Palestine-Israel conflict and learning from her Arab roots until today.

Best known as the “First Lady of Arab Hip-Hop”, Shadia Mansour has been rapping since she turned eighteen. Being part of the Palestinian Diaspora that resulted from the exile of thousands of Palestinians over the years, she was born and grew up in London, but never forgot her cultural heritage.

Shadia Mansour has been deeply into politics and pro-Palestinian protests from a tender age and is still researching the Palestine-Israel conflict and learning from her Arab roots today.

She soon turned to hip-hop as a way of expressing what the establishment forbade being said (a tendency of hip-hop). From the beginning, the hip-hop movement has been used by the oppressed or outsiders to express experiences of injustice and to give voice to the silent sufferers: “From its roots in the South Bronx, the form has grown in numerous directions. Hip hop charts a familiar history of technological innovation mixed with social protest, and ultimately, commercialization.”¹ (p. 2)

As Iara Lee states, “Growing up listening to American rappers like KRS-One, she [Shadia Mansour] easily related the stories of injustice and oppression voiced in American hip-hop to the experiences of the Palestinian people.`I thought, we’re suffering the same issues,´ she stated in an interview with PNC Radio.”² (p. 1) This means Shadia saw and still sees in hip-hop a way of rebellion, a voice for the oppressed, and a way to speak to the youth whowill shape the world in the future.  “We are the generation that goes to the battlefield with weapons of creation,” she says. “We communicate, debate and protest through art. This is why I refer to our activities as a ‘musical intifada.’ Our weapons will never run out of ammunition because they are weapons of the soul.[…]Hip-hop is our last weapon. If you are not facing guns, you will be facing artists armed with mics,” says Mansour.”⁵ (p. 62)

Arab hip-hop has turned into a powerful movement in recent years, one that speaks directly to young people all around the world thanks to the social-media platforms that are freely accessible. “The rapid growth of social media in the past 10 years has facilitated new methods of self-promotion for the artists without label representation. For Offendum, as well as The Narcicyst and Shadia Mansour, social media is a primary means of promotion and distribution. […] The ubiquity of YouTube and Facebook as means of listening and sharing music facilitates a broad transnational audience.”¹ (p. 3) This means the message can be spread everywhere, and the message that Arab hip-hop is spreading is awareness about marginalized groups “facilitating a diasporic resistance that challenges public fear and repressive state discourse”¹ (p. 3) by promoting cross-continental affinities and producing alternative narrativities of Arabness. Shadia herself expresses this in her lyrics for Somos Surin which she raps in Arabic saying, “Music is the mother tongue of the world/She supports our existence, she protects our roots/She joins us from greater Syria to Africa to Latin America.”

Narrowing the topic to Palestinian hip-hop we could cite Finn:

True to form, the Hip-Hop of occupied Palestine evokes themes of struggle and resistance as artists lay beats about drugs, violence, and the daily oppression they face under Occupation… Their artistic expression represents the “drama of the streets”, the harsh reality of cultural and ethnic subjugation, and continues to be a productive means of expression for Palestinian youth. ⁴ (p. 3)

In this arena, what makes Shadia such a pioneer on the hip-hop scene is not only that she is a woman (who raps wearing traditional Palestinian dress), which is itself difficult in this men’s world, or that she is an Arab woman who climbs to the stage with passion and strength and some rage (see, for example, her lyrics and video called The kufiyyeh is Arab); and it is not only about her pro-Palestinian activism in and out the stage, or her women rights struggle… As Donisson observes,“What distinguishes her from many other British rappers is that she chooses to rap in Arabic even though English is her first language. “Arabic is the language of poetry, a very classical language,” says Ms Mansour. “For me it’s all about originality. I am Arabic, my name is Arabic, and I believe I should rap in Arabic.”³ (p. 1) “As Palestinians, and as Arab people” she explained in an interview with SAMARMEDIA, “we have to preserve everything. Our Arabic language, our clothes…It’s a matter of existence. […]We have our own culture, and for me there is nothing more beautiful.” 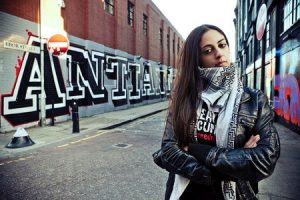 South London, 1985: Shadia Mansour is born into a Christian Palestinian family originally from Haiza and Nazareth (Palestine). Shadia Mansour’s parents, like so many others, were forced to exile when the Israeli forces occupied the Palestinian territory. And so they travelled to England, where they have lived ever since. Even though they were part of a great Diaspora that has persisted for a long time, Shadia Mansour´s family kept in touch with their culture and traditions, and so Shadia was raised in the awareness of her cultural heritage.  “Ms Mansour says she first started singing at the age of five or six, often accompanying her parents at pro-Palestinian rallies in London as a child. ‘We would sing protest songs,’ she says. ‘I come from a musical family, a revolutionary musical family.´”³ (p. 1) In fact, Shadia started singing Arabic classical protest songs byartists such as Fairuz, Umm Kulthum andM. Khalifeh⁵ (p. 62), and was, at the same time, influenced by her political readings of Edward Said, Noam Chomsky andMahmoud Darwish’s poetry⁶ (p. 46) And so, her music was always related to protest and to Arab culture.  She built a name for herself in London’s Palestinian-cultural scene performing in Palestinian cultural events whenever she could.

Shadia went on to study performing arts in London and loved the stage. But she ended up making her living from hip-hop. 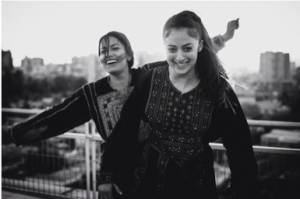 In 2003 she started rapping through a collaboration with the Syrian rapper Elsam Jawaad and the Hip-Hop collective known as“Arap”. She flew to Amsterdam to sing the chorus for Medinat Beirutbut when she arrived she was told an MC was missing and that she had to rap his part. And so she did. As she mentions in the Rolling Stonearticle, this was when she got hooked on the rhythm and the minute she was back in London she started writing her own lyrics, recording and uploading them to Myspace⁵ (p. 63).
From that moment she started working with different artists, most of them belonging to the Arab Diaspora. She sang backing choruses for a lot of songs and rapped on many others, gaining a name for herself in the hip-hop world. Indeed, she is called “The first lady of Arab Hip-Hop”. But it wasn’t all easy since the hip-hop world is dominated and inhabited mostly by men. First, as she explains to the Rolling Stone magazine, she tried to sound like a man, dress like a man and act like one to fit into this scene⁵ (p. 61). But step by step she gained confidence in her femininity and found her way of being, just as she is, in the hip-hop world.

In 2007 she collaborated with the rapper Mahmoud Jreri from the DAM(Da Arab MC’s) hip-hop group. As BBC World states DAM is a “pioneer group of Palestinian rap, who sings in Arabic, English and Hebrew and denounces in its lyrics realities like Palestine’s situation and the violence inflicted on women in Arab society.”⁷ (p. 1) (My translation).

In 2008 Shadia was travelling with DAM to the West Bank to perform in a tour with them. This first tour to West Bank, Palestine, and the conversations she had with the group members she was travelling with made Shadia reconsider her part in the Palestinian struggle, for she was experiencing the problem in its full complexity for the first time: “It was her collaborations with Mahmoud Jreri and brothers Tamer and Suhell Naar of DAM,(…) that were instrumental in making her reconsider her hardcore stance on Palestinian nationalism. The band revealed the complexities of Palestinian politics and society to her.”⁵ (p. 60)

In 2009 she toured in the Netherlands with a children’s choir for the project Symphony Arabica, opened the Annual Black August Benefitfor political prisoners, and was also the main artist in the Arab World Fest(Milwaukee). She toured the USA, raising awareness about the Palestinian conflict, collaborated in The Narcicyst songHamdulillah,and with Lowkey, an Iraqi rapper, in his remake of Long Live Palestine. 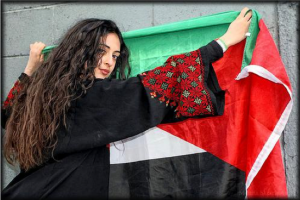 In 2010 Lowkey and Shadia accompanied the writer Norman Filkenstein in the tour called Free Palestine Tour. In this same year she released her first single, The kufiyyeh is Arab,in which the rapper M1 collaborates, and which is produced by DJ Johnny Juice (Public Enemy) and his label Slamjamz. This song became almost an anthem for Palestinians and is enormously famous at the moment.² (p. 1) Since its release she has been building up the recognition she deserves on the rap scene, collaborating for example with the GRAMMY-winning Ana Tijoux in her song Somos Sur, giving speeches, touring and performing around the world. For example, she has been teaching and performing non-violent resistance through art with a group of artists including M1, Lowkey and Mazzi in places like Hebron and the Balata refugee camp, while being filmed for the documentary Existence is Resistancewhich has been shown all around the USA.

As Andersen declares, “She has gained recognition for a handful of her own songs and numerous collaborations. She has earned the respect of her peers and her audience not as a token female artist, but for her talent, as well as her politics.”⁵ (p. 63)

Memory is the most important thing. Our existence today is resistance. We are facing media that misrepresent our people. Not just the Palestinian people but also the Arab people. That’s why we have to preserve everything; it’s a matter of existence.

I’m pro-Palestinian does that make me a terrorist?

Shadia Mansour and M-1 – The Kufiyyeh is Arab الكوفية عربية

Record it! I am Shadia Mansour and the kufiyyais my identity./From the day I was created, Sir, and this people is my responsibility./That’s how I was brought up – between the West and East,/between two languages, between the [rich] miser and the poor man./I saw life from both sides./I’m like the kufiyya./No matter how you wear me, and wherever you take me off, I will remain as my origin: Palestinian.

Shadia Mansour and M-1 – The Kufiyyeh is Arab الكوفية عربية

We are the generation that goes to the battlefield with weapons of creation. We communicate, debate and protest through art. This is why I refer to our activities as a ‘musical intifada.’ Our weapons will never run out of ammunition because they are weapons of the soul.

Shadia is a groundbreaker (…) She is passionate about her point of view. To tell artists what they should be rapping is not my call.

There is a huge void in hip-hop concerning female MCs who are socially conscious,” he says. “I wouldn’t be doing this if I didn’t believe in her.

2013: Selected as one of the “top 100” women in “Arabian Business List of most powerful Arab women in the world today”.

A day with Lowkey and Shadia (2010), Cultures of Resistance Films (Short documentary).

The following is a selection of Shadia’s most relevant music on Youtube:

“We have to change” ft Omar Offendum.

“Too much” ft Lowkey.

“On this Earth is what makes life worth living” (Shadia singing a poem by Mahmoud Darwish).

Shadia’s hip-hop collaborations can be found in a great number. The following is a selection of the most relevant of them on Youtube: