Marie Skłodowska Curie is, undoubtedly, one of the most famous scientists of all time, and certainly the most famous female scientist, seen as the paradigm of female success in science. Her timeless glory lies partially in the huge scientific improvements triggered and enabled by the revolutionary work she did in her lifetime: she was the “physicist and chemist who turned the attention of the scientific world to radioactivity”1 (p. 11). Her deduction that this phenomenon, also named by her, does not depend on the distribution of atoms within a molecule, but rather emanates from the atom itself, was crucial to the understanding of the atom’s structure and matter, and set off a whole new perspective in the scientific field1 (p. 22). Because of that, the very same discovery is still nowadays considered “her most important contribution to the development of physics”1. Soon after this breakthrough, she discovered two new chemical elements with her husband Pierre – polonium and radium. The couple chose not to patent their research methods and results, believing that such an act would be unworthy of a scientist1 (p. 24). Her discoveries not only changed the overall perception of the physical world, but became important in the development of modern art as well. Russian abstract artist, Wassily Kandinsky, wrote about the importance of the discovery of radioactivity in his biographical notes (1901-1913), stating that the knowledge of the disintegration of the atom meant the symbolic disintegration of the whole world2: “Everything had become uncertain, unsteady and fluid”2. 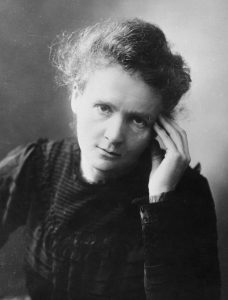 Marie Skłodowska-Curie was born on 7 November 1867 in Russian-occupied Warsaw. As the youngest of five children in a well-educated family with poor financial resources, Marie Curie had quite a sad childhood as she lost both her sister and her mother due to illness at a very young age1 (p. 12). Also, her father had trouble finding a job and supporting the family, because of his opposition to the cultural oppression at the time3 (p. 248). However, being a child of two teachers who paid great importance to education, Curie and her siblings were always encouraged to pursue education in any possible way1 (p. 12).

Since Poland was ruled by Tsarist Russia at the time, Marie Curie was prevented from continuing her education due to the Russian government’s general prohibition on tertiary education for females, despite her excellent academic record. She thus took a position as a governess in order to earn enough money to go to study in Paris, where her sister was studying. During that period, Marie spent her free time studying in her eagerness to advance her knowledge1 (p. 16). She was also part of the secret Flying University, an underground illegal educational initiative. After five years saving money, she finally arrived in Paris in 18913 (p. 248).

In just a few years’ time, Curie’s scientific achievements were already remarkable. In 1893 she had already earned a Master’s degree in physics and in 1894, she completed another degree in mathematics. In the same year, she was introduced to Pierre Curie; a brilliant and established physicist, whom she married a year later. The day they met was crucial to her life, both professionally and personally. It also marked the beginning of an extraordinary partnership in their scientific research1 (p.18-19).

By 1897, in addition to her two university degrees, Marie Curie had been awarded a scholarship from the Society for the Advancement of National Industry and had published a monograph about the magnetization of tempered steel. Her first daughter, Irène, had recently been born when Curie started exploring the mysterious radiation in uranium, which had been discovered a year earlier by the French physicist Henri Becquerel and which she picked as her thesis topic for her doctorate. Soon after her first findings on what she named radioactivity, her husband Pierre dropped his own research and joined her in her work1 (p. 22). In 1898, they discovered two radioactive elements, polonium and radium, which they never patented4 (p. 77- 78). Working in a poorly equipped laboratory and completely unaware of the dangers of exposure to radiation, Marie and Pierre started having health problems1 (p. 23). Despite that, she managed to defend her thesis in 1903, which her examining committee described as the “greatest scientific contribution ever made by a doctoral dissertation”1 (p. 25). Later in the same year, Marie and Pierre Curie won a Nobel Prize in Physics for their work and discoveries along with Henri Becquerel.

In 1904, Marie gave birth to her second daughter, Eve, and two years later lost her husband Pierre in a traffic accident. It wasn’t long after his tragic death that she was asked to take Pierre’s position at the Sorbonne, which was a historic event, as she became the first woman to teach at Sorbonne in its six-hundred-and-fifty-year history1 (p. 27-28). She was a lecturer in general physics until 1909, when she was finally promoted to a full professorship. The same year, she started working at the laboratory that would become known as the Radium Institute, where she continued to research radioactivity5 (p. 45). In 1911, she was awarded her second Nobel Prize, this time in chemistry, “in recognition of her services to the advancement of chemistry by the discovery of the elements radium and polonium, by the isolation of radium and the study of the nature and compounds of this remarkable element”6.

During the First World War, Curie worked to develop small transportable X-ray stations which she would use to diagnose injuries on the battlefront. After constructing several ambulances with her daughter Irène, she began training women as radiological assistants by offering courses in the necessary techniques1 (p. 32). After the war, Marie Curie devoted the rest of her life to the laboratory of the Radium Institute, which became the leading institution in radioactivity research5 (p. 36). She died on 4 July  1934 from aplastic anaemia, believed to have been contracted from her long-term exposure to radiation.

When Marie Curie began her doctoral thesis research, her area of study was not very popular among other scientists1 (p. 20). However, after her first important discovery, Pierre decided to join her. Although they made great discoveries together, the most fundamental contribution was the one she made by herself: “she understood that radioactivity is an atomic phenomenon”3 (p. 250). Despite their collaboration, Marie was deliberately kept out of the Nobel nomination in 1903 and if the Swedish mathematician Gösta Mittag-Leffler had not intervened in her favour, the prize would have been bestowed to Pierre and Becquerel only. Even after her inclusion in the prize, the community still downplayed Marie Curie’s skills and role in the discoveries by theorizing that she worked as Pierre’s assistant7 (p. 33-34). The discrimination she faced was magnified after Pierre’s death. When she was called to take Pierre’s place at the Sorbonne, she did not receive his official position1 (p. 28), and the fact that she had turned into an internationally recognized revolutionary specialist on radioactivity did not prevent the Academy of Sciences from denying her membership. She also became a target of the press because of her suspected affair with Paul Langevin 7(p. 35). Marie was attacked by the press like no scientist at the time, facing double discrimination as both a woman and a foreigner. “Although no longer bound in matrimony, she had mistakenly revealed herself as a sexual woman, and thus the fiction of her saintly science was impossible to maintain”7 (p. 35). The achievement of her second Nobel Prize, which happened around the same time, was obscured by subjects completely unrelated to her position in science. The scandal subsided only when the First World War began and, a decade later, Marie was re-introduced to the world as a maternal, saint like, non-sexual widow7 (p. 36).

I am among those who think that science has great beauty. A scientist in his laboratory is not only a technician, he is also a child placed before natural phenomena, which impress him like a fairy tale. We should not allow it to be believed that all scientific progress can be reduced to mechanism.

Cited by John Monahan (2010), They Called Me Mad: Genius, Madness, and The Scientists Who Pushed the Outer Limits of Knowledge, New York, The Berkley Publishing Group.

Nothing in life is to be feared, it is only to be understood. Now is the time to understand more, so that we may fear less.

Chicago, Judy (1979), The Dinner Party, art installation:
-Marie Curie’s name is displayed among other 999 mythical, historical and notable women on the Heritage Floor part of the installation

Fraizer, Robert (1983) “Madame Curie contemplating the role of women scientists in the glow of a beaker”, in Songs From Unsung Worlds: Science in Poetry (1985) ed. Bonnie Bilyeu Gordon, New York, American Association For the Advancement of Science, p.9.

Army Of Lovers (1993), “The Ballad of Marie Curie”, the Gods of Earth and Heaven, Stockholm Records.

Per Olov Enquist (2006), The Book About Blanche and Marie, Woodstock, NY, The Overlook Press.