Grace Hopper was among the first modern computer programmers. She worked during the Second World War with the automatic calculating machine, known as MARK I. The career that followed is one the most awarded ones in the field of computer science.

Grace Hopper was among the first modern computer programmers. She worked during the Second World War with the automatic calculating machine, known as MARK I. The career that followed is one the most awarded ones in the field of computer science. Her greatest achievement was the co-ordination of the collective scientific development that led to the invention of the first programming language that used simple English-like commands instead of using numbers and symbols. The programming language is called COBOL, and it was once the most used programming language in business and is still in use today. The development of COBOL helped to launch the exponential growth of inventions that took place in computer sciences which eventually led to the information revolution.

The MARK I was a precursor of the world’s first computers. It was the brainchild of scientist and Navy officer Howard Aiken, who had received, with the help of U.S. Navy, sufficient status at the Harvard University, allowing him to run his laboratory more like a military unit than a research laboratory (p. 78-79; 74). In 1944, Grace Hopper, thirty-eight years old, came to Harvard to work with the machine and under Aiken’s command. In the following five years, her work included the first rudimentary forms of programming. The MARK I was an enormous machine. The small group of Navy officers that ran it had to get acquainted with the machine’s hardware as well as the functions of its calculative processes. Even though Hopper faced prejudices when she first arrived at Harvard, in 1945, she eventually got promoted to be in charge of the machine and its crew1 (p. 87).

After the war, Hopper’s career in computer programming continued at Eckert-Mauchly Computer Company (EMCC). The research she did there was to become her career’s most significant contribution to the world of computer science. It had become obvious to her working with the MARK I what were the things that were not working when trying to get the machine to do calculus. The hardware of the machine was extremely complicated and malfunctioned easily, yet Hopper had learnt it by heart when she left Harvard. At EMCC she worked on another machine, called the UNIVAC, which was the first computer designed for commercial use2 (p. 205). The UNIVAC was created by two computer scientists, John Mauchly and J. Presper Eckert, who had also founded the company. Even though more advanced than MARK I, the use of the new machine was still very time consuming and so Hopper began to devise a way that would ease the workload of the programmers and make solving of problems with it more efficient.

A-0 compiler times were invented around 1951-1952. Hopper herself oversaw the project and is credited as the original creator of the idea. In her paper, “The Education of a Computer”, which described her efforts to create automatic programming, she outlined the benefits of her invention. What the compiler was used for was to automatically create code, which it assembled by using a catalogue of sub-routines, collected by Hopper over the years, therefore saving programming time for the operators of the calculating machines1 (pp. 220-223). With the use of a compiler, the time spent creating a programme, which were previously all individually crafted, would be reduced according to Hopper, from weeks to hours3 (p. 244).

The A-0 compiler was the first step in creating what would be the most used programming language in business for decades to come. Even though it still suffered from some shortcomings and was not very user friendly, the idea it used, called pseudo codes, was new and efficient. What Hopper was aiming for was to create a common business language, with which every day routines taking place in the field of business could be eased by writing programmes that used English commands and vocabulary related to business instead of mathematical symbols. As the design process that began with the A-0 went on, new models of the compiler were created: The A-1 and the A-2, and finally the B-0, which was presented in 19564 (p. 604). The B-0 would later be known as FLOW-MATIC and it had a great influence in the creation of COBOL, which, in its time, was the most widely used programming language.

The benefit of a common business language was that it could be used on computers of different manufactures. Since every computer was previously programmed individually and by using a language that functioned only on its premises, a need for a common language that would also be more accessible and user friendly had arisen. And in 1959, at a meeting called CODASYL, hosted by the Department of Defence, a group of computer scientists were assembled together to devise a programming language that would serve these new found needs of business. The meeting formed three committees to develop the language. Grace Hopper was assigned as the executive committee’s chief technical advisor and she influenced the work of the so called short-term committee, the members of which were responsible of forming the new language. Yet, as stated by Jean Sammet, a member of the short-term committee, the FLOW-MATIC, a Grace Hopper creation, was influential to the development of COBOL4 (p. 604).

COBOL gained popularity mostly due to the Grace Hopper’s advocacy of it. During her career she had reached acknowledgment in her field and was then able to convince the potential users of new computing technologies of the benefits of the latest inventions, including COBOL. She is mentioned by Sammet as the most commendable advocator of the newly designed language5 (p. 6). In the market, advancement of COBOL did take some time, but eventually it became the most widely used computer language, with more than 80% of all used business applications being written with it in the late 1970s1 (p. 310). 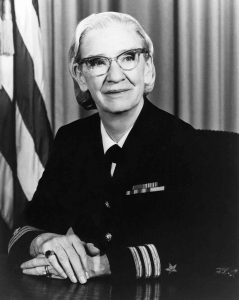 Grace Hopper was born in New York to a middle-class family and was able to take advantage of the newly established possibilities for women to educate themselves. She graduated from Vassar College in 1924 and continued her graduate studies at Yale University. By the time she got her PhD, she also received a position to teach mathematics at her old school, Vassar College. She stayed as a faculty member at Vassar for a total of 13 years, and became a popular teacher among her students6.

It could be said that Hopper’s true career began with Pearl Harbour. When Japan hit the U.S. military base on 7/12/1941, Americans soon took up arms and men headed for Europe and the Pacific to fight for freedom. The women that stayed to serve the home front quickly discovered opportunities in fields of professional life that before had been unreachable. The WAVES-act was authorised in 1942 and Hopper took a change of course in her life and decided to join the Navy Reserve. She attended her training period in 1943 and graduated from the Midshipmen´s school in 1944 as a Lieutenant (junior grade) and was then assigned to serve at Harvard University, under Lieutenant Commander Howard Aiken who ran a project with a unique calculating machine1 (pp. 32-34; 36).

She spent five years at Harvard working with the MARK I, a calculating machine designed by Aiken. During the war years, her mission was to solve mathematical problems that would have taken too much time and effort to be calculated without the help of the machine. As the main operators of the machine, Hopper and her two colleagues, Robert Bloch and Robert Campbell, are stated to be the first modern programmers in history1 (p. 7).

After the war, Hopper did not return to teaching but stayed in her new career within computer sciences. She did not find it hard to find a new position in the field. In 1949, Hopper went on to join a new company in the field called Eckert-Mauchly Computer Company (EMCC). There she would be able to rise to the frontline of computer sciences. Starting at her previous job, Aiken, her commanding officer, had first expressed undisguised disappointment when a female officer had been assigned to work on his machine1(pp. 39-40). But as Hopper was able to show her substantial abilities dealing with the hardware and the calculative processes of the machine, she eventually gained the full confidence of her rigorous boss. When transferring to EMCC she had already established a fine reputation in the field of computer sciences and did not have to content with a low-status position.

In 1953, Hopper’s department of Computation Analysis Laboratory went through a transformation, which was her own proposition, and renamed the Automatic Programming Department (ADP). Hopper became the director of this department and was thus able to leave her mark on the field’s history books. The new department that she ran was responsible for inventing the compilers that began the development of modern computer languages. It began with the A-0 compiler and reached its peak when B-0, later renamed as FLOW-MATIC, was released and put in use at several companies. It was the precursor to COBOL, the most widely used programming language in business at its time7 (p. 1260).

The B-0 became available in 1958 when Hopper was fifty-two years old. In 1965, she stepped down from her position as the director of the ADP, but still remained with the company. Her career as an officer had been following her line of success in the business world. She received several promotions, and after first retiring from the Navy in 1966, was called back to active duty a year later to assist the Navy with the newest implementation of COBOL. She remained active in the field of computer sciences and was a much requested speaker. She advocated the benefits of new computer technology and gained a positive reputation as a charismatic lecturer. Her final retirement from the Navy came in 1986. She passed on peacefully in her sleep in New York, 1992.

I think I always looked for the easiest and best, most accurate way of getting something done. I don’t use high-level theory. I use very basic common sense – the whole original concept of the compiler is the most common-sense thing I ever heard of. And I’ve always said that if I hadn’t done it, somebody else was bound to sooner or later. It was so common sense that it had to be done.

In many ways she [Hopper] embodies within her own person the entire history of programming languages right down to modern times. 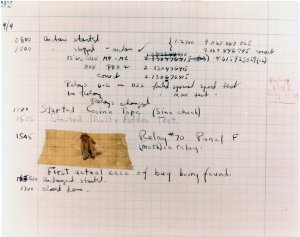 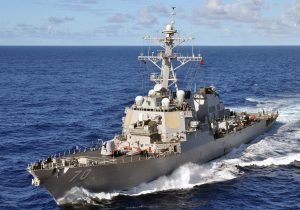 The commonly used expression of a computer “bug” or “debugging” is related to Hopper. In 1945, a malfunction in the calculating machine MARK I, operated by Hopper at the time, was traced to be caused by a moth trapped in the machine. In the log description of the case, the moth was attached under a piece of tape as proof of the incident.

“The Education of a Computer” Meeting of the Association for Computing Machinery – May 1952.

“Compiling Routines” Computers and Automation – May 1953.