Whilst she is not particularly well-known, especially outside scientific circles, Amelia Emmy Noether’s life path is the most accurate example of what women had to go through at the beginning of the twentieth century. Her complex work has been extremely revolutionary in the fields of mathematics and physics.

Whilst she is not particularly well-known, especially outside scientific circles, Amelia Emmy Noether’s life path is the most accurate example of what women had to go through at the beginning of the twentieth century. Her complex work has been extremely revolutionary in the fields of mathematics and physics¹ (p. 64). She became “a founder of abstract algebra”¹ (p. 64) when she developed theories of rings and fields as well as the absolute theory of ideals.

She put forth a unified theory of non-commutative algebra and representation theory and, with colleagues Helmut Hasse and Richard Brauer, Noether deduced that each simple algebra over an algebraic number field is cyclic² (p. 2). However, her most significant contribution was to theoretical physics, which has been recognised as “certainly one of the most important mathematical theorems ever proved in guiding the development of modern physics”³ (p. 73). The theorem, still known by her name nowadays (Noether’s theorem), explains the fundamental relationship between symmetry and conservation law. Put simply, every differentiable symmetry in nature has a corresponding conservation law, which implies that there is a measurable quantity that does not change in any physical process or time; or rather, a conserved quantity³ (p. 97-98). Her theorem was immediately recognised to be of fundamental importance. 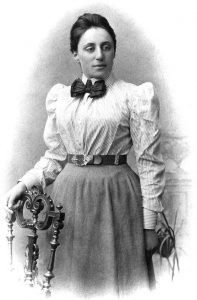 Emmy Noether was born on 23 March 1882 in Erlangen, Southern Germany, as the oldest of four children in a Jewish family. She was taught to cook and clean, as was expected of women at the time; however, she was more ambitious than that¹ (p. 67 – 68). She attended a grammar school in Erlangen, where she studied languages, piano and mathematics, and, in the late 1890s she decided to change direction and pursue a different career. Inspired by her father, Max Noether, who was a well-known professor and mathematician, she decided to study mathematics, something quite unusual for women of her days³ (p. 71). Back in 1900, women were just entering academic life, so they were only permitted to study unofficially and could only participate in some lectures with the professor’s agreement. However, she earned her bachelor’s degree three years later, becoming one of the first women to do so. In 1907, Emmy Noether earned her PhD at Göttingen University, where she attended lectures given by great mathematicians of that era. Her thesis, written under the mentorship of Paul Gordan, was focused on calculating 331 invariants of ternary biquadratic forms² (p. 5).

She returned home and spent seven years working at the Mathematical Institute in Erlangen, but without a salary. In these years, she became member of the German Association of Mathematics and took part in their annual meetings² (p.18-19). Since her reputation as a great mathematician had already spread, in 1915, Emmy Noether was invited by David Hilbert and Felix Klein to return to Göttingen to teach and join them in their mathematical department³ (p. 71). Her acceptance caused some confusion, as not everyone in Göttingen was ready to welcome a female colleague, but thanks to Hilbert’s efforts, Noether was able to work there and give her own public lectures, although still with no financial support³ (p. 72).

Very soon after her arrival, Emmy Noether proved to everyone the value of her extraordinary abilities. Her earliest work at Göttingen consisted of explaining Noether’s theorem, which states that “for every continuous symmetry in the laws of physics, there is a corresponding conservation law”³ (p. 73). The idea of symmetry was at the time a rather revolutionary way of thinking, but the importance and meaning of Noether’s theorem were recognised immediately, as well as praised by noteworthy scientists like the physicist Albert Einstein and mathematician David Hilbert³ (p. 73). Subsequently, Noether continued to focus primarily on mathematics and dedicated herself to abstract algebra; by 1919, she had already contributed to the creation of ring theory³ (p. 73). Her “Idealtheorie in Ringbereichen”, published in 1921, was considered of “foundational importance in the development of modern algebra”³ (p. 73-74). Nonetheless, it was only in 1923 that her teaching activities were finally rewarded with a meagre salary² (p. 47). Her reputation was growing and her fame spreading; between 1928 and 1932, Noether gave lectures all around the globe: at the Moscow State University and the Goethe University Frankfurt, at the International Mathematical Congress in Zurich and at the International Mathematical Congress in Bologna³ (p.73 – 74). Her successful career came to an end, however, when, in 1933, National Socialism took power in Germany. Noether, being Jewish and a woman lost her position at the University of Göttingen, along with all the other ethnic minorities there. She remained focused on mathematics and soon accepted a visiting professorship in the United States at Bryn Mawr College in 1934, but her life abroad did not last long. Emmy Noether died in 1935, at the age of 53, after a surgery to remove a large ovarian tumor³ (p. 76).

As a classic story about the unjustifiable marginalisation of outstanding women in the scientific sphere, Emmy Noether’s life was characterised by a lot of unpaid work, unofficial positions and rejections. Despite growing up in a time and place where ethnic minorities met a tolerant and receptive academic community, studying as a woman was still an issue. Women were just starting to get permission to participate in university programmes and their presence was still rarely accepted; for instance, when working on her PhD, Emmy Noether was Paul Gordan’s only female candidate² (p. 5).

Noether became an outstanding mathematician and one of the most important investigators of abstract algebra of the twentieth century. Her work remains relevant even in contemporary mathematics and physics, yet very few know who she is. During her lifetime, she was admired and respected by some of the most important scientists in history, yet she faced sexism; she participated in changing the course of physics, yet her professorship carried no salary whatsoever; she triggered radical revisions in the very structure of mathematics, yet she remains unknown even today. For Emmy Noether, proving to be an exceptional mathematician was not enough to get the recognition she deserved.

If one proves the equality of two numbers a and b by showing first that a ≤ b and then a ≥ b, it is unfair; one should instead show that they are really equal by disclosing the inner ground for their equality.

1932: Ackermann-Teubner Memorial Award, with Emil Artlin for their contributions to mathematics

Emmy Noether has been honoured with several memorials:

Several schools are named after her

Byers, Nina (1996), “E. Noether’s Discovery of the Deep Connection Between Symmetries and Conservation Laws”, Proceedings of a Symposium on the Heritage of Emmy Noether, IL, Bar-Ilan University.

Phillips, Lee (2015), “The female mathematician who changed the course of physics – but couldn’t get a job”, Ars Technica <http://arstechnica.com/science/2015/05/the-female-mathematician-who-changed-the-course-of-physics-but-couldnt-get-a-job/> (last accessed 10 Jan. 2017).