E. K. Janaki Ammal was, first and foremost, one of the most prominent scientists of India’s pre- and post-independence era, working mainly on cytogenetics and botany.

E. K. Janaki Ammal was, first and foremost, one of the most prominent scientists of India’s pre- and post-independence era, working mainly on cytogenetics and botany1. Her research career began when she started working as a geneticist at the Sugarcane Breeding Institute at Coimbatore (city in the state of Tamil Nadu, India), where she studied the nature of polyploidy in sugarcane and the cytogenetics of the Saccharum officinarum2 (p.7). She also contributed to the making of several intergeneric hybrids such as Saccharum / Zea and Saccharum / Erianthus2(p.7). After moving to England, Janaki Ammal worked as a cytologist and focused her research on the chromosome patterns and behaviour of a great number of garden plants. In collaboration with Cyril Dean Darlington (1903-1981), she co-wrote a book in which she recorded the diploid chromosome number of almost ten thousand species of flowering plants3. On her return to India, she did further work on the genera of Solanum, Datura, Mentha and Cymbopogon1 (p. 93-94).

Among her research interests, phytogeography and ethnobotany are notable. Janaki Ammal worked not only on phytogeography and evolution by researching the Himalayan uplift and the race history of genera of Asian plants, but also on the geographical distribution of sugarcane across India1 (p.96). In addition, her research on certain tribal communities of South India resulted in recording the value of important plants such as Dioscorea4 (p. 294). 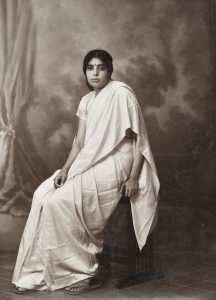 E. K. Janaki Ammal was born in Tellicherry (now Thalassery, in the state of Kerala, India) on 4 November 1897. She was the tenth child of Srimathi Devaki and Sri E.K. Krishnan. Janaki Ammal, completed her undergraduate studies at Queen Mary’s College in Madras (now Chennai, in the state of Tamil Nadu, India) and she obtained her Honours Bachelor in Botany from the Presidency College1 (p. 89). In 1925, she completed her master’s at the University of Michigan and, in 1931, she earned her PhD at the University of Michigan, again as the first Oriental Barbour Research Fellow2 (p. 4). For four years, between 1921 and 1924, Janaki Ammal taught Botany at the Women’s Christian College (also in Madras) and for two years (1932-1934) she was Professor of Botany at the Maharaja’s College of Science at Trivandrum (capital of the state of Kerala).

Her research career would begin in 1934, when she first worked as a geneticist at the Sugarcane Breeding Institute at Coimbatore. She then moved to the United Kingdom, firstly as an assistant cytologist at the John Innes Horticultural Institution, where she met Cyril Dean Darlington (1903-1981), a prominent English biologist and geneticist with whom she co-wrote the book Chromosome Atlas of Cultivated Plants in 1945. During the Second World War, she became a Cytologist at the Royal Horticultural Society at Wisley (London). Having returned to her country in the post-independence era, she was appointed Special Officer for reorganising India’s Botanical Survey (in 1951) by India’s Prime Minister, Jawaharlal Nehru (1889-1964), and became the first Director of the survey’s Botanical Laboratory at Lucknow (city in the state of Uttar Pradesh, India)1 (p. 91). In the 1960s and 1970s, Janaki Ammal held different scientific positions in various research laboratories in India and was an Honorary Professor at the University of Jammu and Kashmir. Moreover, during her last years, Janaki Ammal strongly supported the social movement “Save Silent Valley,” which was opposed to the construction of a 240 MW hydroelectric project at Silent Valley in Mukkali, in the Kozhikode District4 (p.299-300). E. K. Janaki Ammal died on February 7, 1984. Until her final days, she was an active researcher and botanist at the Botany Department at Maduravoyal (Chennai, India).

Despite the boundaries often imposed by her gender, race or caste4, E. K. Janaki Ammal was recognised across the world for her contribution to cytogenetics and botany. In 1955, she was bestowed the honorary degree Legum Doctor by the University of Michigan1 (p. 97). The same year, Janaki Ammal was the only female and the second Indian to participate in the International Symposium “Man’s Role in Changing the Face of the Earth,” sponsored by the Wenner-Gren Foundation and held in Princeton5. Two years later (in 1957), Janaki Ammal earned her fellowship at the Indian National Science Academy (INSA) and became the first woman scientist Fellow not only in INSA, but also in any science academy in India6. In addition, due to her distinguished scientific work, she received the Birbal Sahni Medal in 1960 and the Padma Shri (one of the highest civilian awards in India) in 1977. Finally, Janaki Ammal was granted the Fellowship and Membership in many international Societies and the flowering of the white magnolia, on which she worked at Wisley, is named after her: Magnolia Kobus Janaki Ammal.

Blessed with the ability to make painstaking and accurate observations, she and her patient endeavours stand as a model for serious and dedicated scientific workers.

From a young age, she was endowed with the courage to make choices and the versatility to change course and adapt where and when required. With her passion for plants, she defined for herself her goals and purpose, and her mission in life.

In the process she reshaped the internal frontiers of science, empire and nation in significant ways and helped to rethink the vision of India’s national future as emerging from many sources that also embraced the tribal, the traditional and the ecological.

1931: She received her PhD as the first Oriental Barbour Fellow at the University of Michigan.
1935: She was elected Fellow of the Indian Academy of Sciences.
1944: She became the first salaried female staff member of the Royal Horticultural Society at Wisley.
1955: She was bestowed with an honorary Legum Doctor by the University of Michigan.
1955: She was the only one female participant of the international symposium “Man’s Role in Changing the Face of the Earth” sponsored by the Wenner-Gren Foundation and held in Princeton.
1957: She was elected Fellow of the Indian National Science Academy.
1960: She received the Birbal Sahni Medal.
1977: She received the Padma Shri by the Government of India.
2000: The Janaki Ammal National Award for Taxonomy was initiated by the Ministry of Environment, Forest and Climate Change of India.
2010: A national seminar on “E.K. Janaki Ammal and her contribution to Indian Science” was held at Thalassery (India) sponsored by the National Museum of Natural History.

The herbarium in the Indian Institute of Integrative Medicine, Jammu (Formerly RRL, Jammu) is named after E. K. Janaki Ammal.

Her work on flowering magnolia resulted in the white Magnolia Kobusbeing named after her.

Janaki Ammal was also Fellow to Scientific Societies such as the Linnean Society, the Royal Geographic Society, the Genetical Society of England and of America and the Indian Society of Genetics and Plant Breeding. 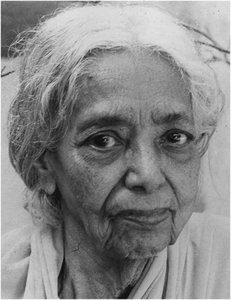