Dorothea Christiane Erxleben became famous for being the first woman to earn a doctorate degree in Germany. After her doctorate, it took more than 100 years, until 1899, for the next woman to complete a doctorate in Germany, while nowadays, the medical profession in Germany is actually dominated by women.

Dorothea Christiane Erxleben became famous for being the first woman to earn a doctorate degree in Germany. At the beginning of the 18th century, a lot of people in Germany were treated by medical doctors who were very little educated and tried to heal their patients with witchcraft or therapies that often caused more harm than good3. This was the time when Dorothea Christiane Erxleben concluded her doctorate with a thesis that placed the highest priority on people’s safety in treatment3. In her opinion, the three duties of a doctor were – to treat quickly, pleasantly, and safely – with safety coming first3. Treatment that was too fast and too pleasant would often carry the risk of deteriorating the patient’s condition3. Nevertheless, Dorothea Christiane Erxleben became more famous for her critical writings about the reasons keeping females from studying. After her doctorate, it took more than 100 years, until 1899, for the next woman to complete a doctorate in Germany, while nowadays, the medical profession in Germany is actually dominated by women1.

Dorothea Christiane Erxleben was born Dorothea Christiane Leporinon the 13th November 1715 in Finkenherz zu Quedlinburg. She grew up with her brother, mother, who was the daughter of a priest, and her father, who was the medical doctor, Christian Polycarp Leporin. Due to poor health, Dorothea Christiane Erxlebenoften had to stay in bed during her childhood and had the time to educate herself1. As a result, she was already able to read and write atthe age of five1. In addition, she was also interested in Latin, botany, anatomy, and the Bible from an early age,and also attended private lessons together with her brother1.Since girls were not allowed to attend high school (Gymnasium), the rector of the Quedlinburg Gymnasium, Tobias Eckhard, taught her Latin privately because Dorothea’s father recognised his daughter’s talent and tried to support her3. In a letter, the rector wrote to the 16-year-old Dorothea about a woman that had earned a doctorate at the University of Bologna and suggested a similar goal to her3. While her brother was attending medical school at the University in Halle, Dorothea Erxleben was working as an assistant at her father’s medical practice. In 1742, her father finally managed to publish one of her manuscripts, in which she wrote about an investigation of the causes that kept the female gender from studying. However, he had to write a preface himself in order to get it published1.In the same year, Dorothea, who was 23 years old at the time, married the deacon Johann Erxleben, who was 18 year older and a widower with five small children. Her path to promotion was very difficult. Her father died and left debts behind, so she had to run his medical practice alone and, in addition, she had four more children with Erxleben, who soon became seriously ill, too.

Moreover, some of her colleagues reported her for “Kurphuscherei” (treating patients without a medical education) when one of her patients died, which caused a temporary ban of her practice as a medical doctor2. Fortunately, Dorothea Erxleben was able to successfully fight for a special permit from the Prussian King, Friedrich II, to submit a dissertation at the Medical Faculty in Halle1. By that time, Dorothea had already dealt extensively with the work of the Medical Professors in Halle3. Her great amount of experience from her years of activity at her father’s office, but also the intercession of the abbess from Quedlinburg, allowed her to be finally admitted to present her doctoral viva in before five professors in Halle1. On 6 January 1754, she handed in her dissertation written in Latin with the title “Quod nimis cita ac quounde curare saepius fiat causa minus tutae curationis“. She succeeded on 6 May 1754, shortly after her son Johann was born, and became a doctor of “Arzeneygelheitheit“. Her doctoral supervisor, Professor Johann Juncker, was very impressed with her work3. In the following years, Dorothea Erxleben pursued her medical work, took care of her large family of nine children and took on tasks on the behalf of her husband1. She translated her work from Latin to a more extensive German version, which appeared in 1755 and was meant, above all, to be widely understandable3. She was only 44 years old when her 62-year-old husband died. Only two years later, she also died at the age of 46. Some sources say she died of unknown cause in her hometown on June 19 or 13 in 1762, while others claim she died due to breast cancer1.

Dorothea Christiane Erxleben’s father, the medical doctor Dr. Christian Polycarp Leporin, recognised his daughter’s talent when she was still very young and tried to support her from then on3. Alongside his practical work as a medical doctor, he himself published various medical articles in which he criticised the burden of the theory of medical studies and described practical work as the most essential part for the students. Therefore, he let his daughter work as a sort of assistant at his practice, while her brother was attending medical school at the University in Halle. He then managed to publish a manuscript of hers even though he had to write a preface himself in order to get it published. It was due to her father that Dorothea Christiane Erxleben became the first female with a doctorate in medicine in Germany. He recognised her talent despite her gender and therefore supported her theoretical as well as practical education from a young age.

He who cannot wait cannot heal either.

This text has its value and deserves applause because it came from the pen of a reasonable woman’s room.

cited by Leipziger “Neue Zeitungen von Gelehrten Sachen” in May 1742. (My translation)

„…Not Latin makes itself big now
With daughters of exalted senses,
Not by Räm, by kitchen and economy only,
No, gaining fame through wisdom:
In whose spirit one misunderstood the sex,
And sent them hats and dignity…”

In her hands you are in good hands as a patient, dear candidate! I wish we’d always have such doctoral students, so I would not have to be worried about the patients. 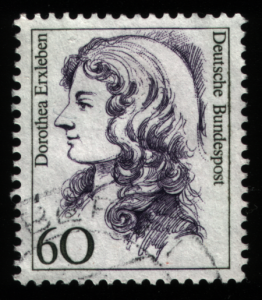 Photo of Dorothea Christiane Erxleben on a German post stamp of the Deutsche Bundespost, appeared on the 17th of.September, 1987.

Award in her name: Dorothea Erxleben Award at the University of Halle in Germany.

Google Doodle in honour of Dorothea Christiane Erxleben’s 300th anniversary on the 13th of November 2015.

Hospital in Quedlinburg named after her: Harzklinikum Dorothea Christiane Erxleben

Medical school in Quedlinburg received the name “Dorothea Christiane Erxleben” in 1960, but it was closed in 1991.

Permanent Exhibition about Dorothea Christiane Erxleben at the Klopstock Museum in Quedlinburg, Germany.

Permanent Exhibition at the Brooklyn Museum. The Dinner Party by Judy Chicago is an icon of feminist art which represents 1,038 women in history among other a painting of Dorothea Christiane Erxleben.

Photo of Dorothea Christiane Erxleben on a German post stamp of the Deutsche Bundespost, appeared on the 17th September1987.

Høyrup, Else (1987), Women of science, technology, and medicine; a bibliography. Roskilde. University.