Taimina’s most famous and, admittedly, greatest achievement has been her innovative approach to teaching geometry using crocheted hyperbolic planes. Taimina’s feat has filled a significant gap in the world of geometry, since students are now able to ”touch and feel a surface that was previously understood only in an abstract way’.

Taimina’s most famous and, admittedly, greatest achievement has been her innovative approach to teaching geometry using crocheted hyperbolic planes1(46).  Dissatisfied with the poor quality of paper hyperbolic surfaces used during a workshop she was attending, Taimina convinced herself that a better and more durable alternative existed2(13). Inspired by Confucious’ motto “what I hear I forget, what I see I remember, what I touch I understand” (1), she constructed her first small crocheted hyperbolic plane. More such creations were to follow3 (13). It was a major breakthrough4 (18), as the idea of hyperbolic planes only appeared in 1829 and 1832 by Nicholas Lobachevsky and János Bolyai respectively but without any success in creating a physical, usable structure to resemble a non-Euclidian surface.

Taimina’s feat has filled a significant gap in the world of geometry, since students are now able to ”touch and feel a surface that was previously understood only in an abstract way”5 (278). Recalling a conversation with one of her colleagues, who was an expert in hyperbolic planes, she describes his excitement when for the very first time he could touch something that had hitherto  existed only in ”his imagination”5 (278).  As David Henderson explains in relation to Taimina’ s innovative creations, physically experiencing straight lines and realising how they behave and intersect when they are folded is essential in acquiring a quick and concrete understanding of the ”intrinsic properties of hyperbolic geometry”6.  The success of Taimina’s crocheted hyperbolic planes and their influence on mathematical science is also evident through the numerous orders she has received to provide mathematics departments around the world with her highly sought-after constructions6.

In addition to her hyperbolic planes, she has published two books. ”Crocheting Adventures with Hyperbolic Planes” is a personal approach to her invention in which she describes what inspired her to produce her crocheted structures, their importance and the complex science behind them3. ” Experiencing Geometry” provides a thorough historical review of the evolution of ideas in mathematics and in geometry in particular7.

Daina Taimina was born in Riga, Soviet Latvia, on 19 August 1954. As the Soviet educational system highly favoured and encouraged women in science8, Taimina received all her tertiary education in Latvia.  She graduated in mathematics education and mathematics from the University of Latvia and subsequently completed her PhD in Theoretical Computer Science at the same university under the supervision of the computer scientist Rusins Freivalds. In 1977, she started lecturing at the University of Latvia and she did so for the next twenty years. During her career at the University of Latvia, she developed an interest in the history of mathematics9 (177) and took the initiative to introduce such a course into the curriculum of mathematics education10(103). This led to the publication of her first book on the history of mathematics, the first of its kind to be written in the Latvian language10(104). Her deep interest in geometry also led to her participation in the ICIM Study conference on the teaching of geometry11(xv), which took place in Sicily in 1995. That  is where she met her future husband and scientific collaborator, David Henderson11(xv). In 1997, she became a visiting associate professor at Cornell University.

Her Latvian upbringing was a major influence in her creations due to the country’s rich tradition in handicrafts12. It is her gender, however, that seems to have been the main contributor to her scientific success, since she managed to turn a hobby intrinsically associated with women into an outstanding work of science. As Bellos puts it, the idea of crocheted hyperbolic planes would have never been conceived had Daina been born a man5 (279).  Taimina is, therefore, the perfect example of the value of female contribution to science, as her invention also had a major impact on the cultural history of mathematics, a field where women have been historically underrepresented5(279).

Daina Taimina currently resides in the United States with her husband, David Henderson, and their children and holds the position of senior research associate at Cornell University.

David Henderson, apart from her partner in life, has been Taimina’s main collaborator. They co-authored the book ”Experiencing Geometry” as well as a journal detailing the process of constructing crocheted hyperbolic planes2. Moreover, they have lectured together in Los Angeles upon the invitation of The Institute for Figuring3 (6) and at Cornwell University in New York. Also, as colleagues at the same University, they co-operated in teaching various classes and workshops2.

Taimina’s scientific innovation was widely acclaimed by the academic and scientific community.  Alex Bellos claims that Taimina’s crocheted models have offered a ”visceral experience of the hyperbolic plane” and an ”important new insight into a conceptually punishing area of math”5 (278). In an article entitled ”Professor let her fingers do the talking” the New York praised Taimina’s innovative idea to turn her talent in crocheting into an advanced method for teaching geometry13 while Discovery magazine exalted her achievement in materialising a concept that was deemed to be unimaginable14.

If the universe has a dodecahedral geometry, it would be finite. Personally, I’d quite like it if the universe were infinite and turned out to be hyperbolic. But it’s something to be determined by measurement.

”Crocheting the Hyperbolic Plane: An Interview with David Henderson and Daina Taimina” (2005), Cabinet, by Margaret Wertheim, <http://www.cabinetmagazine.org/issues/16/crocheting.php> (last accessed 16 May 2017)

When I first started to crochet models of the hyperbolic plane, one of my family members frowned that no serious mathematician would waste time on such nonsense. It says something about the general misconception of how mathematicians think and how they work.

I think my style is somehow determined by my mathematical education if we talk about “hyperbolic crochet”. But it is also influenced by long traditions of handcrafts in Latvia. For color schemes I look at nature – nature is always right in choosing tones.

Hyperbolic space is an unimaginable concept, unless you’re a Latvian mathematician who’s handy with needle and yarn. 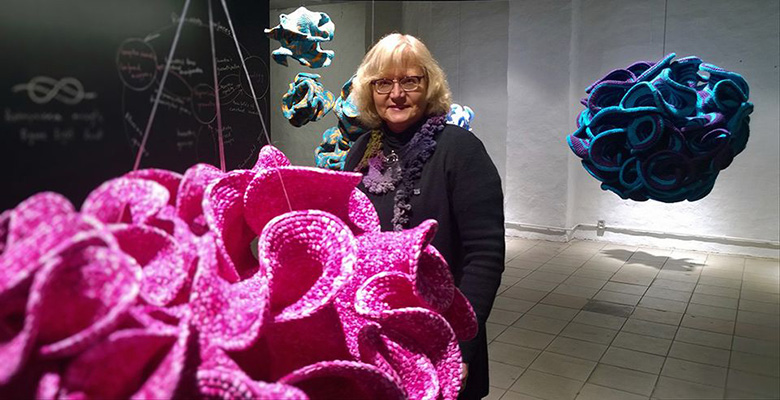 Daina Taimina’s works have exceeded the limits of science. Her crocheted models are now considered works of art12 and have been showcased in arts exhibitions in many parts of the world such as the USA, Italy, the UK and Belgium15. She has also carried out workshops on the art of crocheting to prospective artists, encouraging students to break into three dimensional crochet design12. Another indication of Taimina’s success in merging mathematics with the arts was the invitation she received to deliver a speech at the Mathematics and Mathematics Education in Fibre Arts session in Atlanta in 2005.

Also, using one of her most famous artistic creations, ”The White Cloud of Thoughts”, as linkage to her political views of today’s Europe, she published an article in The Guardian in the days leading up to the Brexit referendum with the title : ”Together the EU is greater than the sum of its parts”16. She strongly supported the remain side claiming that, just as the pieces of her installations create something greater when combined, a country is stronger and more prosperous when part of a community, in this case the European Union16. 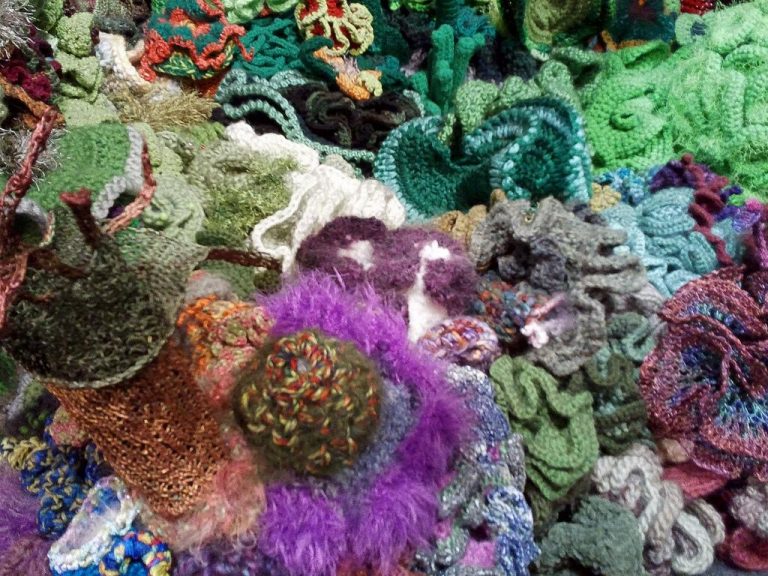 Inspired by Daina Taimina’s innovative crocheted models who is credited for spawning ” a global movement of crochet activism”.